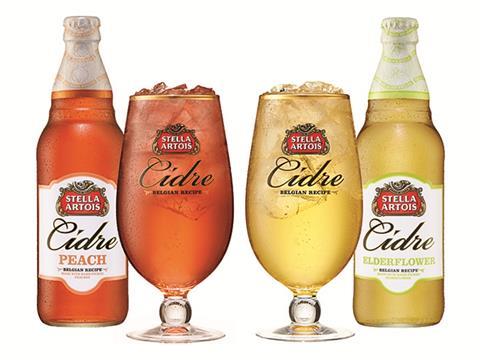 AB InBev is expanding its Stella Artois Cidre range to five flavours with the launch of two new variants – peach and elderflower.

The brewer will hope the new lines, rolling out this month, can revive the fortunes of the brand, which has dipped 5% by value to £64.5m on volume sales down 7.3% [Nielsen 52w/e 11 October 2015]. Meanwhile, rival brands more focussed on fruit-flavours have flourished.

The decline was driven by value sales of Stella Artois Cidre Original and Pear falling 15.2% and 18% respectively.  Brand sales had been buoyed up by Stella Artois Cidre Raspberry, which was launched last May and attracted £7.2m sales in the period to October.

“Since its launch, one million people have purchased Stella Artois Cidre Raspberry and so we’re delighted to bring even more fresh flavours to the market,” said Stella Artois marketing manager Phil Pick. “Stella Artois Cidre peach and elderflower continue our legacy of being category innovators and offering consumers the absolute best premium flavours and taste”.

Stella Artois Cidre Peach is described by AB InBev as “a delightfully fruity peach taste contrasted with subtle citrus and rose floral tones, and is light with strong fruity character throughout”; while Elderflower “exudes a fresh and lively aroma complemented by crisp apple, star fruit and bergamot tones. The variant features notes of nutmeg and cloves contrasting the sweet elderflower”.