Time for change on late payments 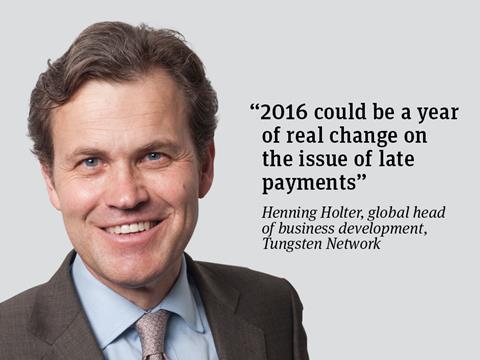 Last year, the issue of late payments came to the fore as being of serious concern to the future of the UK’s SMEs. Independent research commissioned by Tungsten showed that a quarter of small and medium-sized businesses are regularly put at risk of insolvency because of invoices not paid by debtors on time.

It’s an issue that has dogged the large grocers in particular, and Experian research early in the year revealed that supermarkets paid their suppliers a full 10 days later than the national average, prompting a number of retail bosses to say they could do better.

SMEs are the backbone of the UK economy, representing 99% of all private sector businesses and employing 60% of all those who work in the private sector. Long payment terms present a real problem to such businesses, with Tungsten’s research revealing that 12% of the UK’s 5.2 million SMEs are having to wait more than three months to get paid. That is a long time to wait for a small business.

According to the Code, all businesses should pay their suppliers within 30 days. Experian’s research showed supermarkets were paying their suppliers on average 32 days late.

It’s something many businesses, including large retailers, are taking seriously. Signatories to the Code, which include Asda, Tesco and Marks & Spencer, are working hard to introduce new business practices and technologies that will make shorter payment terms achievable, especially for those who would benefit most.

In the retail business community, 2015 may come to be viewed as a watershed year on the issue of late payments, and 2016 as a year of real change. As a supporting partner on the Code, alongside Barclays, RBS, HSBC and Lloyds Bank, we’ve already seen great things happen, and we’re sure there’s more to come.