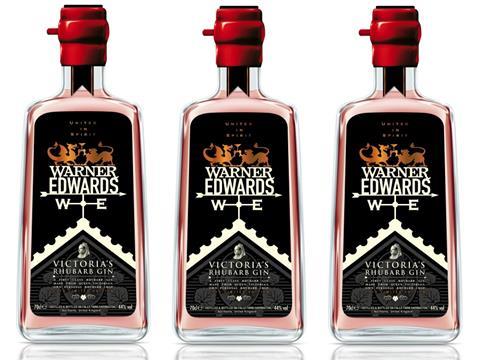 The Northamptonshire-based company has created 8,000 bottles of the 40% abv Victoria’s Rhubarb Gin, which will be stocked at Fortnum & Mason from 1 September (rsp: £35).

The new variant is based on its Harrington Dry Gin, which has been steeped with rhubarb grown on the Crown Estate. The rhubarb comes from plants originally grown in Queen Victoria’s garden. Each bottle is numbered, labelled and wax-sealed by hand. Warner Edwards co-founder Tom Warner described the gin as “smooth and earthy” with a “fruity balance of sweet and sour”.

The distillery launched Harrington Dry Gin in December 2012 and has since introduced two seasonal lines – an infused elderflower gin and a sloe gin. This year it ramped up production of the elderflower gin from 2,000 to 15,0000 units after the first year’s batch sold out in eight weeks.

The company has plans to develop a rum and a whisky, using barley grown on the two founder’s respective family farms.