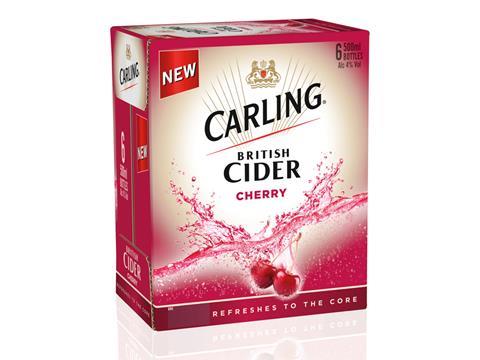 Molson Coors is extending its Carling British Cider into the flavoured ciders market with a 4% abv cherry variant.

Rolling out in single 500ml bottles (rsp: £2.15) and a six-pack (rsp: £12) exclusively to the off-trade, the launch follows the rollout of the original Carling British Cider 12 months ago.

“The success of Carling British Cider among retailers has been fantastic,” said Carling brand director Jim Shearer, adding that the launch of cherry had been driven by consumer demand. “We researched several different new flavours and cherry got a unanimous thumbs-up. We look forward to continuing to innovate in the cider market, which we believe offers superb opportunity for growth.”

The new flavour will be supported alongside original Carling British Cider in a £4m advertising push that will include TV, outdoor and digital activity from the 4 April. The brand will also be backed by a national sampling campaign, following similar activity last year when more than a million consumers tried the drink, said Molson Coors.

Recent launches in the burgeoning flavoured cider category include Strongbow Citrus Edge – a 4% Strongbow cider with lemon and lime – and new apple & guava variant from Rekorderlig.