Maintaining the 10% growth in suncare we reported in 2013 was always a tall order. Add the unreliable British weather to the equation, and it was nigh-on impossible.

Sure enough, in 2014 the mercury failed to hit the heights it had reached a year earlier, and the suncare category slipped back into decline. The return of the traditional British summer, which got off to a balmy start in June but then cooled in time for the school holidays in July, contributed to a 5.1% fall to £188.2m on volumes down 2.5% [Kantar Worldpanel 52 w/e 4 January 2015].

But are the sector’s ills really all down to the damp squib of a summer? What else affected sales? And with average prices falling and the discounters taking growing share of the market, what’s the forecast for the coming year?

“Weather, of course, plays a big part and the category was last year trading over a record-breaking year in 2013, the hottest summer in seven years,” says Pardeep Dhillon, senior brand manager for Nivea at Beiersdorf. “The summer of 2014 also saw retailers focus on the Fifa World Cup, and suncare suffered because it was given less quality space.”

So suncare lost out as products such as lager, bagged snacks and instant barbecues were given the prime spots in store and promoted as must-have components for Britain’s World Cup get-togethers. Indeed, that lager has returned to growth after several years of decline is thanks in no small part to the intense featured space promotional activity during the World Cup.

Nivea, the sector’s biggest brand, bears the scars of this reduction in featured space for suncare products. The brand has suffered a 16.8% fall in value as volumes slid 13.4% [IRI 52 w/e 24 January 2014], a decline worth £7.7m to Beiersdorf, and the steepest absolute decline of the year. Rival Garnier Ambre Solaire, meanwhile, has defied the market’s decline with sales up 11.2% on volumes up 8%, thanks chiefly to distribution gains with Tesco and Ocado [BrandView.com]. 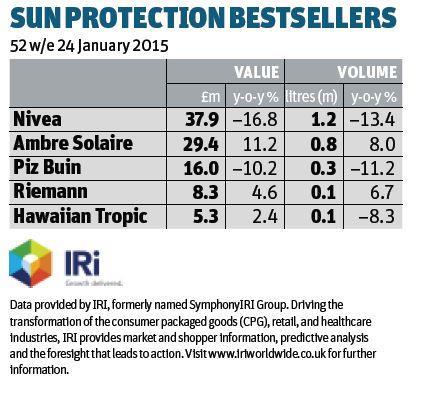 With opportunities to further increase distribution limited over the coming year, maintaining growth will be a challenge - particularly given many experts expect retailers to begin trimming their suncare ranges to make their share of shelf space better reflect their rate of sale in time for the 2015 season.

“Suncare is the worst performing of the leading beauty care categories,” says IRI director of health & beauty insights Peter Murphy. “And it’s over-ranged compared with sales. In summer, the average store carries 269 suncare SKUs - this halves to 135 in winter when considerably less is sold. Compare this to toothpaste, which sells about twice as much as suncare in a year and has around 105 lines in an average store all year round.”

There are yet more clouds on the horizon. With Aldi and Lidl having defied the downturn, and value retailers such as Home Bargains, B&M and the round pound retailers (classified as ‘bargain stores’ by Kantar in the retail share table, left) enjoying strong growth, the pressure on brands to keep prices down and promote more is mounting.

“The last year saw an increase in multibuys and the introduction of EDLP in some retailers,” says a spokesman for Delph producer Fenton Pharmaceuticals. “This has played a part in the 3.8% drop in the average price of sun protection. It’s a race to the bottom that allows cheap, inferior products to win out.”

Rather than seeking to compete purely on price, established brands are fighting back with innovation. For example, Garnier is looking to replicate the success of its Ambre Solaire Dry Mist, launched in January 2014 and credited as a key driver of growth, with a variant suitable for sensitive skin. The brand is also hoping to entice children with a six-strong limited-edition Kids Minions range featuring the popular characters on pack. 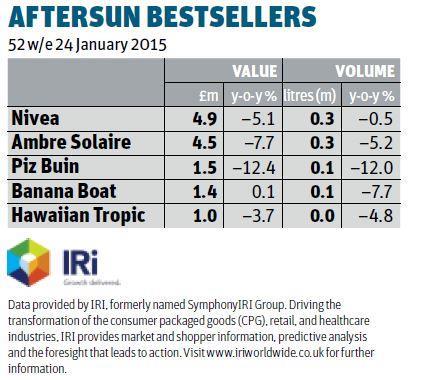 “Sun lovers are increasingly looking for products that will protect them for longer,” says Jen Edwards, marketing director at Riemann, the only other major brand to have realised value and volume growth - of 4.6% and 6.7% respectively - in the past year, according to IRI. Edwards puts much of the brand’s growth down to its ‘10-hour protection’ promise, though a fall in average price has probably helped too.

NPD that offers longer lasting protection is here to stay, says Ken Beck, senior accounts manager at Calypso brand owner Linco Care, which has launched an ‘all school day long’ range into its portfolio. “This type of product will become the norm as people look for time-saving products in every aspect of their life,” says Beck. “It also means you need to pack less product in your suitcase when going abroad so is a great holiday product.”

But having the right product is only part of the challenge. With the sector’s only growth coming through value orientated retailers, it’s increasingly important to make sure you’re in the right channels, says Linco Care’s Beck, who claims IRI’s measure of Calypso does not tell the full story because it does not cover Matalan, Wilko and Home Bargains. “They are a huge part of our business,” he says, adding the brand has had a good year.

It will take more than focusing on the right channels to rescue fake tan, however. The so-called ‘Towie effect’ has run its course, it seems: value is down 19.3% on volumes down 24.1% [Kantar]. Part of the problem is changing trends in fashion, says Fake Bake global beauty consultant Sandra Vaughan, adding the pale look has become more fashionable. The weather has also played a part, she says: “If skin isn’t on show, why dress it up?”

Which nicely sums up the challenge for the entire market. 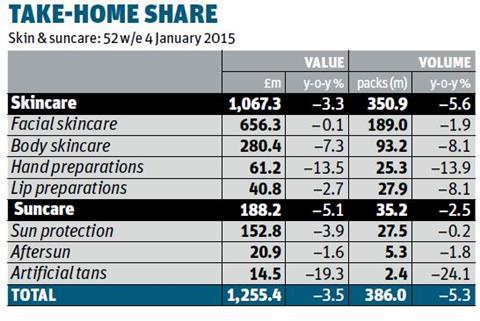 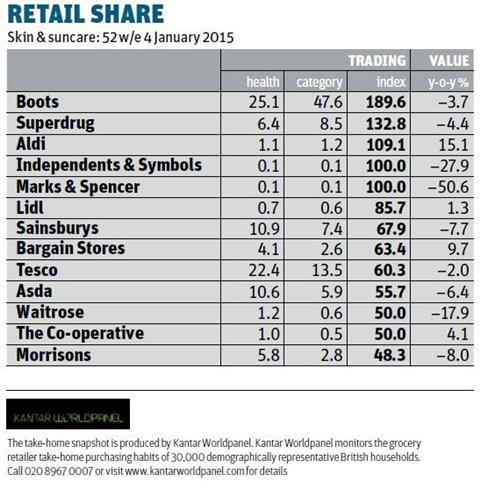 The summer of 2013, the hottest summer in seven years, saw a spike in shoppers and strong sales growth in suncare.

Last year’s comparatively mild summer made it difficult to annualise the strong 2013 performance, as one million shoppers stopped engaging with the category and spend declined.

Artificial tans was the hardest hit subsector, declining by 19.3%. As with total suncare, the key contributor to decline was fewer shoppers, suggesting women are tending towards a more natural look.

Losses in beauty & suncare have been felt by most key retailers, but value-oriented channels have gained. Aldi has experienced the fastest growth, followed by bargain stores collectively. This is consistent with what we’re seeing at a total toiletries level; purchasing is switching from traditional retailers to value retailers. 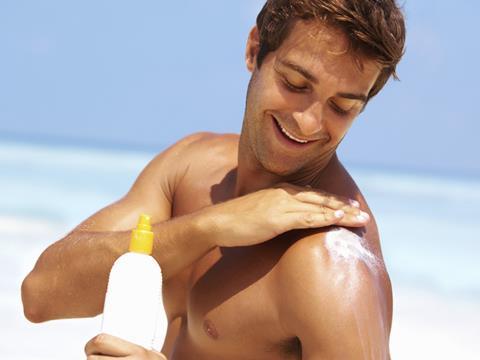 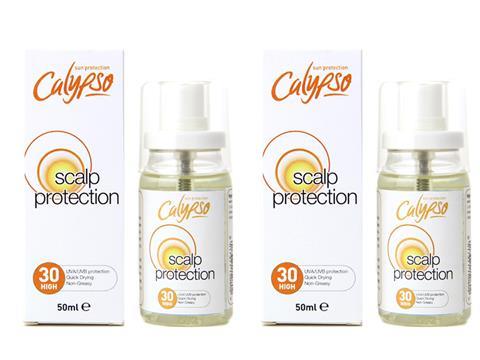 Calypso Scalp Protector is a non-greasy dry oil formulation that can be sprayed directly through the hair to offer instant protection to scalps and partings. The waterproof spray, available from retailers Bodycare and Home Bargains (rsp: £4.99), comes in small 50ml bottles making it ideal to be kept in the handbag or car for on-the-go use. It has been designed to help customers protect exposed areas of the body that “are often forgotten”. 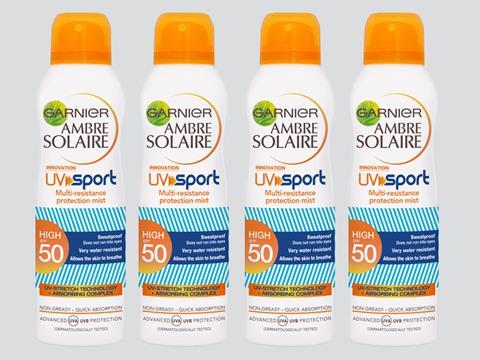 Tested under “extreme conditions”, the Garnier Ambre Solaire UV Sport Sun Protection Mist features a patented filtration system that creates a layer of protection that “follows skin movements and allows it to breathe”. The range has been created specifically for sports activities, is dermatologically tested and offers SPF 50 (rsp: £17). 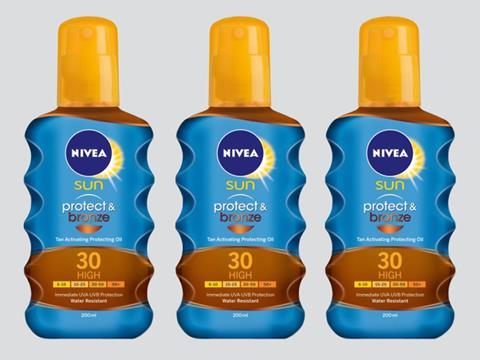 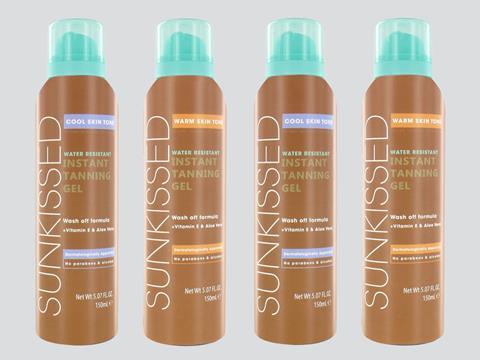