Prices for milk powder remain down on a year ago, but both whole milk powder (WMP) and skimmed milk powder (SMP) have risen month on month due to increased demand. WMP has also been boosted by a drop in production, which was down 14% year on year in January. Production of SMP, however, increased by 9% to 115,000 tonnes.

High global supplies of Cheddar have caused UK prices to fall by a quarter year on year. January’s production of 31,660 tonnes is down 8% on the previous year’s figure, which has helped monthly prices to stabilise. UK cheese exports in December were up 16% year on year to 11,400 tonnes, bringing the total for 2014 up 7% to 134,000 tonnes.

Despite UK butter production being down 18% year on year to 10,470 tonnes in January, prices have continued to fall as a result of low demand. Producers are increasingly looking to produce other dairy products with better margins. 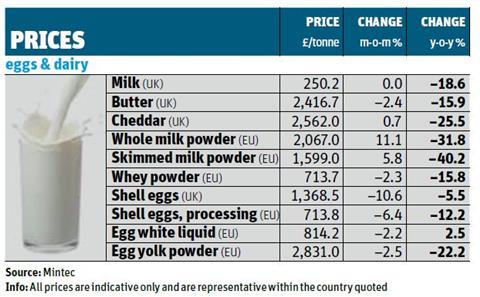 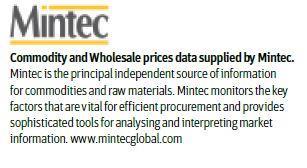