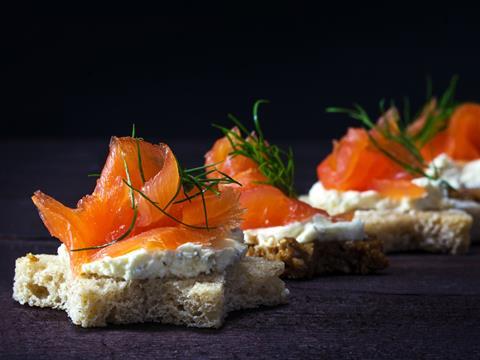 Smoked salmon will be an expensive treat in the mults this Christmas, but commodity prices are starting to ease as supplies recover.

Supply shortages pushed the cost of salmon to historic highs last year, with prices from the world’s largest producer, Norway, reaching £7.50/kg last Christmas, which is almost double the historical average festive price for the fish. However, at the start of December this year, Norwegian salmon prices were at £4.10/kg, down by more than a third from last year’s prices.

Norway’s salmon supply tightened through 2016 as sea lice outbreaks resulted in limited harvest weights and a large increase in operating costs for producers trying to bring lice numbers under control.

At the same time, the world’s second biggest salmon exporter, Chile, suffered a deadly algal bloom, which reduced the amount of salmon on the global market, further pushing up commodity prices.

However, the market has started to recover in 2017 because high prices for salmon improved profitability in the Norwegian sector, ­driving investment into ­technologies to reduce sea lice numbers and increasing expenditure on feed.

The overall effect has been a sharp increase in harvest weights, with October 2017’s feed sales in Norway reaching an ­all-time high for the month.

In addition, plans are already being put in place to secure Norway’s market share in the coming years. Licences are currently being sold which will allow higher volumes of salmon to be kept on farms, corresponding to a potential 700,000 tonnes increase in harvests.

With productivity in Norway reaching new highs and fewer problems with disease and sea lice, we could see prices falling even further into 2018.

Michael Liberty is a market analyst for Mintec