UK milling wheat has fallen to its lowest price since 2010 thanks to high British yields and strong global supply.

The UK harvest got under way in late July, and most UK wheat crops are yielding well above average, according to the HGCA, which predicted that if average yield remained at this level it would be the best harvest since 2008. Total UK wheat production is forecast at between 16 and 17 million tonnes, up roughly 30% year on year.

Coming after a period of rising prices in UK milling wheat as existing stocks dwindled, the harvest has prompted a 30% month-on-month crash in price to as low as £140/tonne - about 5% down year on year and the lowest level since 2010, according to analysts Mintec.

Russia was expected to have a massive yield, said Camgrain senior trader Simon Ingles, while the US maize crop was likely to be very strong and put pressure on wheat prices as it was also used as animal feed.

But Hovis this week said despite the drop in underlying wheat prices, the premium paid for wheat of breadmaking quality had risen by 30% in recent weeks to about £40/tonne.

“Premiums have risen sharply in the past few weeks due to a reduction in the planted area along with a lesser amount of the crop making full milling specification,” said Hovis commodities head Gary Sharkey. “The crop is also lower in protein, leading to increased costs to maintain protein levels.” 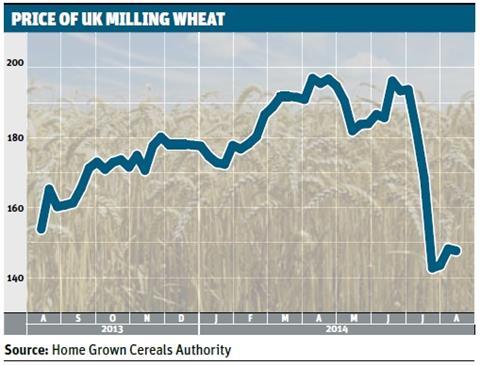