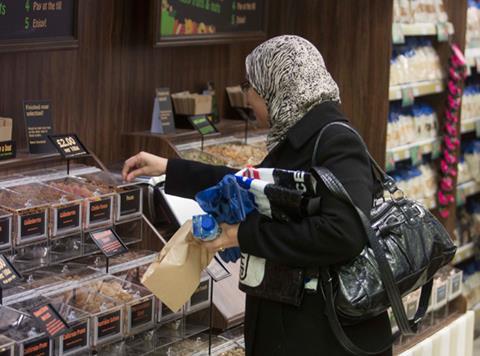 Holland & Barrett is planning to double store openings this year, with a special focus on larger formats.

The health food retailer usually opens 30 to 35 stores a year, but this financial year, ending in September, it is aiming to open 65 stores, of which 15 will be relocations.

Strong growth in sales and profits gave it the confidence to pursue an aggressive store opening programme, it said.

The extra space will give Holland & Barrett the chance to roll out some of the in-store displays and features it has been trialling, including vinegar and oil dispensers, consultation areas and dried fruit and nut pick ‘n’ mix.

“Aisles and aisles of bays aren’t particularly appealing,” said Gurdial Flora, group director of property at Holland & Barrett’s parent company NBTY Europe. “We want to break them up with zones and specialist display units that better showcase our products and give customers a more interesting shopping experience.”

He cited the recently revamped store in London’s Leadenhall Market, which has a protein shake bar called Shake-a-Whey and dried fruit and nut pick ‘n’ mix, as an example of the kind of store Holland & Barrett wants to open.

The new stores will be concentrated in Greater London and other large cities.

There are currently more than 700 Holland & Barrett stores in the UK.