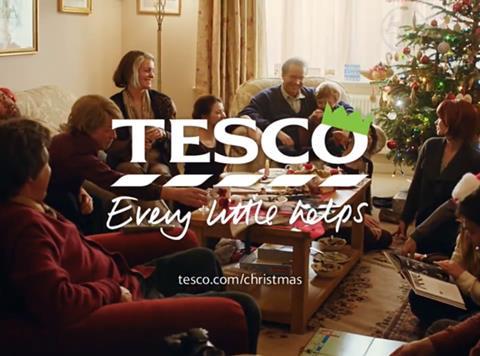 Tesco was cheaper than Asda on the Champagne, wine, bacon and Christmas pudding

Tesco has won the Christmas Grocer 33 for the first time ever - stunning rival Asda, winner for the past four years.

With a total festive shopping bill of £135.80, Tesco’s Christmas 33 trolley - comprising turkey, all the trimmings, lashings of booze, as well as batteries, indigestion tablets and other Christmas essentials - was 41p cheaper than Asda’s £136.21p total, with Tesco cheaper on the Champagne, red wine, streaky bacon and Christmas pudding.

“The team at Tesco are delighted to have won this year’s Christmas Grocer 33 basket,” said David Wood, Tesco’s UK marketing director. “Winning the Grocer 33 shows how hard we’re working to keep prices low on the products that matter most at Christmas and we are giving our customers better value than anyone else. With the relaunch of Tesco Finest, we’re showing our customers how much we care about the quality of the food we sell over Christmas, too.”

However, Asda CMO Stephen Smith labelled Tesco’s victory “hollow”. “It’s a hollow victory for them to win by just 41p, when we do the right thing by holding down the cost of living week in, week out,” he claimed. “And we’re 10% cheaper, guaranteed, even on this basket. Yes, we are disappointed today, but on price we are in this for the long game.”

“It’s a hollow victory for them to win by just 41p, when we do the right thing by holding down the cost of living week in, week out”

The Christmas win is only Tesco’s second victory of the year, with Asda winning 45 of the past 50 Grocer 33 baskets.

Tesco’s price strategy came under renewed scrutiny this week after Bernstein Research claimed it had raised prices at an average growth rate of 4.6% a year from 2010 to 2013 and was moving closer to Sainsbury’s on price. Bernstein analyst Bruno Monteyne, who previously worked for Tesco as its Asia supply chain director, said Tesco was now between 5% and 9% away from Asda on price, and issued a ‘sell’ with a target share price of 300p, heaping more pressure on CEO Philip Clarke and his senior team.

Bryan Roberts, retail insights director at Kantar Worldpanel, defended Tesco’s refusal to enter a price war: “The growth of Waitrose and Sainsbury’s is proving price is no longer the most important factor for UK consumers.

“If price were the most important factor then Asda would have knocked the competition out the park a long time ago. Tesco would be ill-advised to chase Asda down the price alley. It’s about competing on multiple battlefields such as quality and service and availability.”

But retail analyst Nick Bubb warned that an isolated victory was no cause for celebration. “The G33 outcome this week could be a little flukey, because it’s relatively easy to come out on top with a £1/£2-off deal on a bottle of wine. The City has suggested Tesco probably should have banked enough margin in recent months to come out with more punchy promotions in the key pre-Christmas run-in. There is now a danger the new Tesco falls between two stools, by not being cheap enough on the one hand and not being premium enough on the other.”