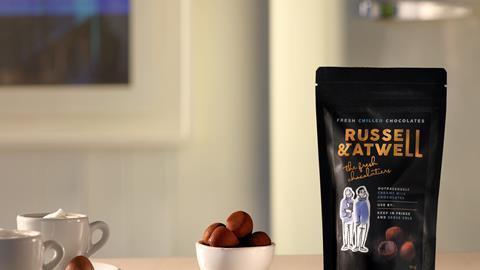 When confectionery industry veterans Steve Russell and Giles Atwell brainstormed ideas for their own chocolate business, one word kept coming up: fresh.

Having held senior roles at some of the largest chocolate brands in the world, they knew how good chocolate made with fresh dairy ingredients could taste.

With their brand Russell & Atwell, launched last September, they have made it their mission to bring fresh chocolate to a wider audience – and shake up the market in the process.

Most chocolate sold at retail is shelf stable, with fresh products usually the preserve of premium chocolatiers, sold in exotic flavours and packed in decorative boxes.

“If you want to buy fresh chocolate today, you will go to a high-end chocolatier,” says Atwell. “You’ll spend £20, you’ll get maybe five pieces flavoured with goji berry and beautifully presented in a box.”

Russell & Atwell has taken a different approach, packing chocolates in pouches to be sold from chiller cabinets. And it has eschewed fancy flavours for classics.

Its chocolates are sold in a 90g pouch containing 12 or 13 pieces for around £7. And there’s not a goji berry in sight, with the brand producing just four variants. Outrageously Creamy Milk, Extra Dark, Salted Caramel and Ridiculously Smooth Dark are made from the likes of fresh organic cream from Cotteswold Dairy, honey from Salisbury Plain, and Dorset sea salt.

That confidence in pleasing a crowd is born from Russell and Atwell having more than 30 years’ industry experience.

Atwell claims he “has chocolate in his veins”. His grandfather launched a couverture chocolate supplier in 1921 and his father ran the business for decades, before the family sold up. A former customer of that business, an artisanal chocolate producer outside London, now manufactures the Russell & Atwell range.

Atwell’s own career began as a graduate trainee with Unilever before 14 years at Cadbury where he worked across four continents in roles including marketing director and head of innovation. Returning to the UK, he joined Godiva to launch the brand in supermarkets and c-stores, growing a £50m business to one worth £100m.

Russell, meanwhile, is a chocolate scientist who began his career at Mars and, like Atwell, worked at Mondelez and Godiva, where the two met.

With Russell & Atwell, they hope to combine experience from high-end chocolate such as Godiva and mass-market brands such as Cadbury – to do what Innocent did for smoothies and Gü did for desserts.

That mission is driven by direct-to-consumer sales through the Russell & Atwell website, alongside listings in farm shops and delis.

“We’ve been knocking on local doors in shops and high-end delis and foodie outlets,” says Atwell. “Many of our early listings were people contacting us and saying we’d love to sell you, that somebody had walked into our shop and talked about you, and that’s lovely.”

Although the pouches need to be merchandised in chillers, orders are usually sent by 24-hour post, with honey in the chocolates acting as a preservative.

It means the business has to keep a close eye on the weather. “A few weeks ago, I put a social media post up saying it is so sunny we’re not going to send for a couple of days,” says Atwell. “We know summer is going to be trickier and we may have to send bigger orders through refrigerated delivery.”

Currently, many retail orders are delivered by Atwell himself, which he clearly loves doing. “After being in a big corporation where you are miles away from the action, it’s an absolute delight to be talking directly with the customer and looking at the shelf,” he says.

“Occasionally the customer twigs I’m the Atwell on the pack and we’ll get talking about how it’s going and where are they going to merchandise it.”

So, how hard is it to convince a shop owner to make room in their crowded chiller for chocolates? Not very, Atwell suggests. “Rather than going to a supermarket and hear a sharp intake of breath and them saying ‘we have no fridges in our confectionery aisle’, delis just have fridges and shelves. If they like the look of you, they’ll move things around in their fridge to make room.”

This has resulted in the brand’s chocolates sited next to a wide range of products, including organic lettuce. “While I prefer it when we’re next to things that look similar like desserts, it is a privilege to be listed in what are hand-selected and already tight ranges,” he says

Sampling through delis is helping to spread word of mouth, plus the brand sent out samples through 12,000 Pasta Evangelists boxes in November and still gets enquiries from them. And a Kickstarter campaign last autumn helped get the name and products to consumers.

Looking to the future, new formats are absolutely in the offing, says Atwell, who played a key role in development of bite-sized formats at Cadbury.

“Chocolate is a multi-format market and, having worked in global chocolate for a number of years, it’s not difficult to figure out some of the stuff that we would like to do in the future.”

While in no rush, the business hopes ultimately to secure supermarket listings, which are likely to start online.

“We see ourselves as pioneering and if that shakes things up a bit in the chocolate aisle then we are happy to do that.”

Russell and Atwell will be among hundreds of artisan producers exhibiting at the Farm Shop & Deli Show, to take place at NEC Birmingham between 5 and 7 July