Soft touches are getting softer 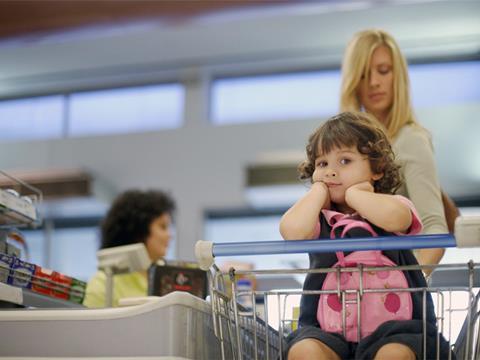 My food shopping takes place almost entirely online, a decision taken in agreement with my wife following a particularly spectacular meltdown by my then three-year-old daughter in a Sainsbury’s car park. The details are lost to the mists of time (though I think I may still carry a physical scar), but it almost certainly originated in our refusal to give in to a demand for sweets or a toy.

My wife and I don’t always refuse our kids’ demands, of course. Sometimes we’re too tired to fight the request, or too distracted or – just occasionally in my case – feeling generous.

So, as a parent, I was intrigued to see research in which just 16% of parents polled by Mintel confessed they find it difficult to say ‘no’ to their child when they ask them to buy them something.

And despite the claims of the remaining 84% who presumably claim they don’t find it difficult to say ‘no’ to their little treasures, 79% of parents said they had purchased a snack for their child when asked.

A further 77% had purchased a beauty or toiletry product (horribly familiar; my son was demanding Lynx when he was eight years old), 69% purchased sweets, and the same proportion a book. No mention was made of crossbow, hunting knife or power drill – all things my lad has requested over the years.

While no-one in the retailers’ CSR departments or PR offices is likely to admit it, such stats are, of course, great news for retailers. Pester power is big business – it has helped keep blind-bagged Lego Minifigures near the top of the best-selling toy chart for years (£2.49 is a small price to pay for a quiet trip round Tesco), while the EHI Retail Institute points out that confectionery delivers typical profit margins of 31.5% versus an average of 12.4% across all categories.

And here’s some more good news for stores: the Mintel research suggests the bond between British parents and their kids is getting stronger. With 58% of seven to 15-year-olds saying their parents are their best friends (clearly didn’t ask my kids), this is likely to make parents more likely to give into demands.

“The greater degree of inclusivity in modern British families is marked by the high proportion of children who view themselves as being very close to their mum and dad,” says Mintel senior consumer and lifestyles analyst Ina Mitskavets. “Such closeness, however, also manifests itself as a greater degree of influence children and teens have over their families’ purchases and activities.

“Most children ask their mum and dad to buy them something when they shop together, and most parents oblige despite the fact that they tend to view themselves as being fairly strict.”

Such closeness is being reinforced as the lines between childhood and adulthood continue to blur, adds Mintel, with mums and dads found watching the same TV shows, listening to the same music and even wearing the same brands of clothing as their kids (indeed, the former toddler who brought a Sainsbury’s car park to a standstill regularly nicks my shirts).

Further evidence of this blurring of the lines came to light this week, when analysts NPD Group revealed Frozen had been overtaken as the supermarkets’ top toy licence by the Minions. The appeal of the little yellow critters, suggested NPD Group global industry analyst Frédérique Tutt, was the characters’ “universal humour” that appealed to most age groups and “brought families together”.

Which will be worth remembering next time little Timmy is kicking over a free-standing display unit because you wouldn’t buy him some Haribo Minions.