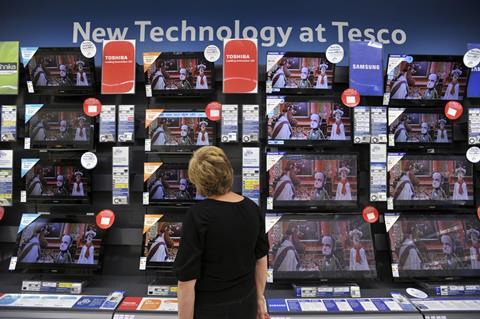 The three biggest supermarkets have suffered a four percentage point year-on-year drop in share in a falling home entertainment market in the three months to the end of June, research shows.

Latest research from Kantar shows Tesco’s market spend share fell two percentage points from 10.3% to 8.3% in the 12 weeks to 30 June, compared with the 12 weeks to 1 July last year.

Asda fell one percentage point from 7.3% to 6.3%, as did Sainsbury’s. Morrisons was the only supermarket monitored to increase its share of spend - up 0.3 percentage points from 3% to 3.3% of the physical entertainment market, including videos, games and music.

The total physical home entertainment market fell 19% as retailers felt the impact of falling shopper numbers and a lack of big-name releases in the music, film and gaming sections.

With Amazon Prime Day sales still to be accounted for and new consoles due later this year, the market continued to depend on gift-hunting shoppers and benefited from the £24m worth of sales generated by Father’s Day this period, Kantar said.

“Amazon and eBay are increasingly popular with shoppers wanting to get the latest releases without leaving their homes - particularly if a traditional retailer has disappeared from their local high street,” said Kantar consumer specialist Claire McClelland.

“Amazon will be expecting this trend to continue as a third of shoppers planning to shop during its Amazon Prime Day were intending to buy physical entertainment, compared with 42% who had their eye on electronics.

“However, if last year was anything to go by, success for Amazon inevitably did not necessarily mean bad news for the high street.

“People that bought something from the online giant during the week of Amazon Prime Day in 2018 spent 40% more on the high street than the average shopper during those days - demonstrating the value of those shoppers to bricks-and-mortar retailers as well.”