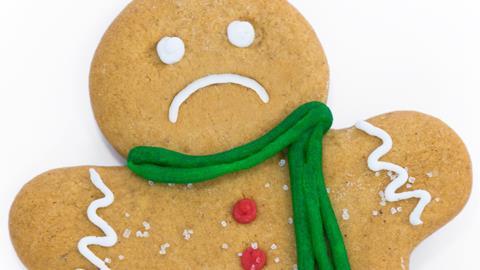 What’s going to happen to grocery spend this Christmas?

The countdown has begun to the most wonderful time of the year. But given the year we’ve had so far, that’s not saying much. So are Brits excited for Christmas despite the pandemic? And what is going to happen to grocery spend?

Unsurprisingly, festive spirits have taken a bit of a knock in 2020.

A survey of almost 1,000 UK adults undertaken by YouGov for The Grocer, ahead of Boris Johnson’s announcing a second lockdown in England this month, found almost half of Brits (48%) were already feeling less excited by Christmas this year.

That tallies with a separate Shopmium survey of 1,676 users of its app – again, conducted before the PM announced the latest restrictions – that found 46% of consumers were looking forward to Christmas less this year.

Shopmium’s research found people were more likely to have a negative outlook if they were in a region with high Covid rates, and thus tighter restrictions. In the north east, 53% said they were less excited about Christmas this year, for example, while 51% of those in Yorkshire and the Humber also had a negative outlook.

Which suggests the second national lockdown in England is likely to have further dented consumer confidence ahead of the festive season, says Stuart Sankey, head of Shopmium UK.

“The ongoing restrictions on movement and socialising had already had the effect of dampening the UK’s mood and the lockdown is only going to escalate these feelings of gloom,” he adds.

“From our most recent consumer survey, we could see that the majority of UK consumers anticipated ongoing restrictions or at least the ‘rule of six’ to still be in place at Christmas. This had a negative impact on Christmas spirits, with 46% of the UK saying they are looking forward to Christmas less this year than last.

“News of lockdown 2.0 will only have compounded this disappointment. The restrictions on social opportunities that typically define the festive period are playing into the UK’s low spirits, along with the fact that 43% will have less disposable income this Christmas than last.”

With cases of coronavirus surging in recent weeks, most shoppers had already been holding off on making plans for Christmas, the surveys found.

Over a third (36%) of respondents to the YouGov survey had not decided how to spend Christmas this year – versus 34% who had already made plans.

Again, that tallies with the Shopmium survey, which found 62% of consumers had not decided on plans for Christmas and Boxing Day this year.

“Our survey showed that Christmas and Boxing Day plans are still very much ’up in the air’,” adds Sankey. “This is mainly driven by a need to understand what the Covid-19 case volumes and risks are, as well as awaiting government guidance on social restrictions nearer the time.”

People were also planning to do less socialising over the wider festive period – even before new restrictions were announced, the Shopmium research found. Of the consumers it surveyed, 64% said they were less likely to make social arrangements at home, while 77% said they would make less social arrangements in pubs, bars and restaurants this year.

Not everyone is planning to play it safe, though. “Nearly one in 10 (8%) openly admit that they plan on ‘bending the rules’ at Christmas time if there are restrictions on how many people can socialise together,” says Sankey.

So what does all this mean for grocery spend?

The YouGov survey found 71% of Brits expect to spend the same on food and drink as usual this Christmas, with 15% planning to spend more than last year.

Nearly half (52%) of those surveyed by Shopmium ahead of the lockdown announcement said they planned to reduce their spend this Christmas, with 34% saying they would cut back on food and drink spend.

However, with supermarkets remaining open during lockdown while pubs and restaurants have been forced to shut, Shopmium predicts overall grocery spend should hold up.

“Although shopping trip frequency is likely to fall during lockdown 2.0, we don’t expect to see a decrease in overall spend for the festive period,” says Sankey. “The average basket value per visit is likely to go up as people are consuming more at home and want to get what they can while at the supermarket.”

There could be some changes to the types of groceries consumers splash their cash on this Christmas, though. Shopmium found nearly three in 10 (29%) UK consumers plan to spend less on alcohol than last year, as well as specific premium Christmas products such as turkey, champagne and desserts. “Instead, consumers expect to spend more on fresh meat, fruit and vegetables, as well as store cupboard items, suggesting that for many, Christmas 2020 will be a less luxurious affair than normal,” says Sankey.

The pandemic has also driven an increased appetite for healthier food, with 51% of consumers surveyed by Shopmium planning to buy healthier products this year. “More than a third (39%) also intend to buy more local produce, perhaps as a means of supporting local businesses and building community spirit at this difficult time,” Sankey adds.

Shopmium’s survey suggests supermarket visits had returned to pre-Covid levels ahead of the second national lockdown, with eight in 10 (79%) visiting a grocery store two or more times a week and 38% going to three or more different stores on a weekly basis.

However, even before the second lockdown in England was announced, some 39% of shoppers said they were looking to buy their groceries online this Christmas, according to the YouGov survey. That’s only likely to increase if restrictions continue through the festive period.