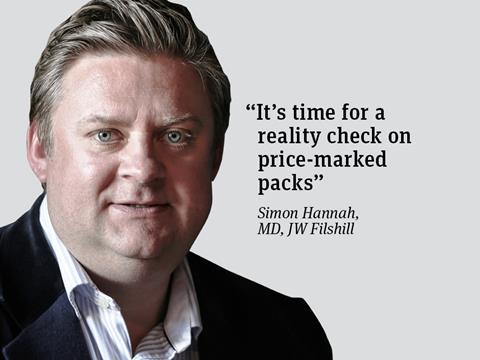 Much has been written about the impact of the new national living wage (NLW) on larger retailers but much less so about independents.

What is unique to independent retailers is that a much larger percentage of the products they sell are currently price-marked packs (PMPs) - so the shared margin between them and their chosen wholesaler has, by and large, already been defined.

Nobody is against the principle of paying valued staff more money, provided the business model can sustain it. Given the likely impact of the NLW, I am concerned it might reverse the support among independents for this hugely successful tool.

Data from one of our company-owned KeyStores shows nearly 50% of all products sold carry a price mark at the moment. This raises the troubling prospect of turnover needing to increase by £51,500 per year at the current margin to cover the increase in overhead brought about by higher wage bills.

To deal with the NLW, drastic steps such as reducing staff numbers are being considered as valid and realistic options. But from what I can see, nobody is talking about changing the ranging in their stores to improve margins. Nobody wants to talk about increasing prices to shoppers - but there needs to be a bit of a reality check here!

Our sector has created a category we have now become heavily reliant on. To build shopper confidence about pricing, we have covered almost every category in price marks. Yes, this is being driven by shopper demand to some extent, but the low-margin model that PMPs follow is being fuelled by brand owners. The current margin pressures on retailers are high and what I am seeing are too many low-margin PMPs being sold and too many services being offered to drive “footfall”, although this doesn’t generate sufficient margin.

We have to defend our retailers’ margin at all costs in order for them to be able to continue to offer first-class service, availability and, of course, continue to invest in their businesses for the benefit of their local communities. In wholesale, we have a unique position where the depth of supplier relationships we have are the strongest in the trade. We need to capitalise on that.

This is not about going into battle with the supply chain around increasing margins or even creating PMPs that offer higher margin. It is about using the deep supplier relationships we have to now work on the right strategy. This will be about reviewing what a realistic value chain looks like in term of PMPs, it will be about opening up and being even more collaborative with our suppliers and retailers, and it will definitely be about sharing more data and statistics. Reward mechanisms should be in place for those who will engage in this environment - there is no question this will drive a culture of compliance and collaboration.

The reality is if this increased pressure on overheads - exacerbated by the NLW - is here to stay, we will have to change some aspects of our trading mentality and look for ways to reward the retailers who provide an open, collaborative way of doing business.