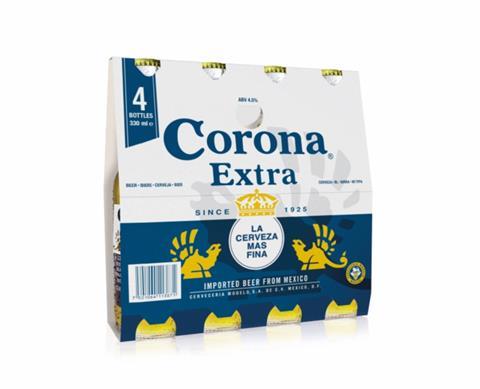 Sales are booming but now A B InBev must manage stock

Molson Coors, exclusive UK distributor of the AB InBev-owned Corona brand, has warned retailers that orders it placed for the Mexican beer in the first quarter of this year would not be delivered to schedule.

“This is expected to lead to a shortage of stock in the UK,” Molson Coors said this week, adding that “to minimise the impact on our customers and consumers, we have taken the decision to proactively manage Corona stock until further notice.”

Some experts think the lack of stock on Corona, a £60m-sales brand in the UK that’s imported from Mexico, has been caused by increased demand ahead of the World Cup.

But other industry insiders claim AB InBev’s brewery in Mexico has been suffering a shortage of bottles and it was not known when this would be resolved. AB InBev said it would work closely with Molson Coors to manage stock and minimise disruption. “We are working hard towards a solution,” it added.

Neither brewer would say what direct impact the shortage was likely to have on retailers, although a senior buyer at one of the big four said he did not expect to run out altogether.

However, Mintel senior drinks analyst Chris Wisson said similar world beer brands such as Sol and San Miguel, were also in strong growth. As many beer drinkers often switch between brands, these were well placed to capitalise should Corona go off shelf.

“While this could be a problem for Corona if it is unavailable for an extended time, we have seen brands bounce back after being off-shelf,” he added, “though it’s a shame for Corona if it misses out on anticipated uplift from the World Cup.”