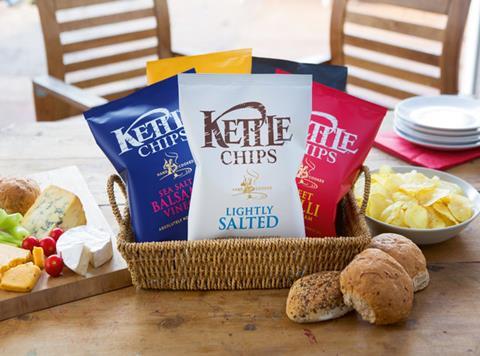 Shoppers are getting better deals on crisps as brands ramp up competition in the snacking aisles.

Kettle Chips this week blamed plummeting profits on “increasingly aggressive headline promotions” on crisps, which it claimed were putting “huge pressure” on margins.

Standout reductions on multipacks include Tesco and Morrisons cutting the price of Walkers 12x25g multipacks by 95p to £2, and Sainsbury’s selling McCoy’s 6x28.5g multipacks for £1 - 80p less than a year ago.

Indeed, most of the major crisp manufacturers have seen average prices fall across their branded ranges, although there were some exceptions, with average prices for Seabrook crisps and Pringle’s both higher than this time last year.

Prices have been steadier on mults’ own-label ranges. Though prices are down on some individual lines, the majority have stayed the same year on year. Notable exceptions include a 60p reduction in the price of some of Waitrose’s handcooked lines, with 150g bags down from £1.60 to £1 over the past year, and several Tesco 6x25g multipacks, which have come down from 99p to 85p. The discounters have also largely held steady: for example, a 6x25g multipack of salt and vinegar crisps remains at 75p in both Aldi and Lidl.