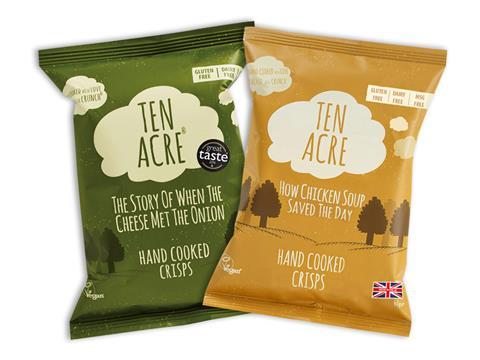 Ten Acre Crisps has seen its exports to Japan almost double over the past month, following potato shortages in the country.

The British brand received an order from Japanese distributor Kewpie for 1,250kg of crisps last week, following a 650kg order on 16 March.

The bulk order follows a shortage of potatoes in Japan, after the northern island Hokkaido was hit by typhoons and floods last year. Hokkaido is the main potato-growing region in Japan, producing around 80% of the country’s potatoes.

Various Japanese snack companies have halted the sale of several crisp brands due to the shortage, including Calbee, which is part-owned by PepsiCo.

Consumers have been panic buying crisps in the wake of the shortage, which has led to an increase in prices according to Bloomberg. Prices of some sharing bags of crisps were going for 1,250 yen (£9) on an auction website on Friday.

Yumsh Snacks, owners of Ten Acre, began exporting five flavours of crisps to the country in February, with a single serve pack costing the equivalent of £1.

“Our distributor there is getting far more demand from new potential customers than we were expecting,” said Tony Goodman, CEO of Yumsh Snacks. “Will the demand grow short term and then drop off? That’s almost inevitable because local products will be cheaper.

“Obviously what we hope is that having had the opportunity for consumers to try Ten Acre, those sales will encourage stores to keep with them even if the local products come back on the shelves. The question no one can answer at the moment is how quickly that will happen because these potato crop problems could go on for some time.”