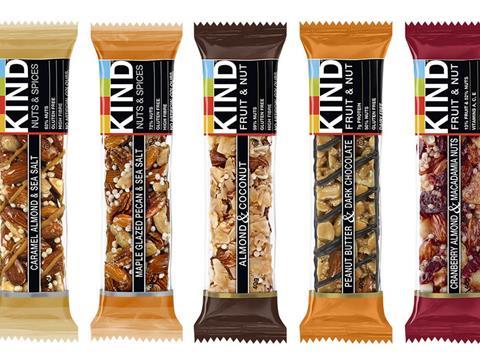 A US snack bar brand claimed to be enjoyed by president Barack Obama is next month making its UK debut.

Kind Snacks is rolling out two ranges of bars to 400 Tesco stores from 12 October: four Fruit & Nut bars and three Nuts & Spices. The latter trio do not contain fruit and have about 40% less sugar per 100g than similar bars, according to the supplier.

Seven bars are launching in total, in flavours including Maple Glazed Pecan & Sea Salt and Peanut Butter & Dark Chocolate. The gluten-free bars (rsp: £1.29) are sold in transparent packaging and feature the words ‘Ingredients you can see and pronounce’.

This natural positioning had resonated with consumers seeking less processed foods, said Mintel global food & drink analyst Jodie Minotto, and sales of the brand had grown rapidly, from $51m in 2012 to $237m in 2014 [IRI].

Minotto added the arrival of Kind was likely to be a threat to existing snack bars with a natural, healthy positioning.

The UK rollout is being led by Kind UK MD Kate Lucas, a former general manager at Gü. “We believe Kind is what the British snack category is missing, with the range’s unique flavour combinations setting it apart from others on the market,” she said, adding there was an opportunity to grow the UK snack bar market by £400m.

Support for the UK launch will be focused primarily on sampling.

Tesco free-from buying manager Christel McCombie said she had been attracted to the products by the “unique flavours on offer” and “the way the bars are made with whole nuts and fruit, which makes them distinctive within the market”.

According to the Kind website, president Obama told Kind founder Daniel Lubetzky he brings Kind snack bars when travelling on Air Force One.