The Apprentice's meal kit makers reveal how not to do it 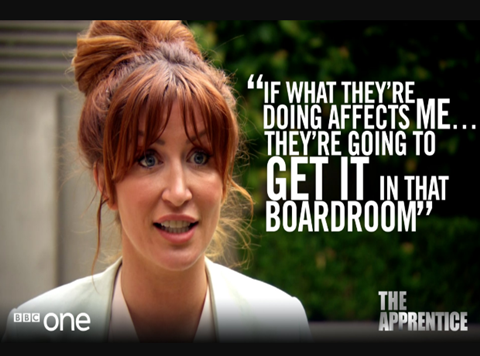 Asking The Apprentice (BBC1, 29 November, 9pm) for insights into the food industry is like expecting the man behind the Amstrad Em@iler to spot a bad business idea. That, however, is what was suggested as two teams of people with questionable interpersonal skills were given the task of designing and marketing a recipe kit.

Eschewing market research, focus groups and everything else that has made recipe kits a success, half of one team spent so long arguing about a name that they were lucky not to end up with something scrawled on a box in Biro. The other half did the recipe, or rather, blundered around the kitchen picking up random ingredients and launching them into the pan on the basis that a chicken curry will be fine as long as you use enough curry powder.

The second team comported itself in a more composed way, waiting until they had to pitch to an audience comprising HelloFresh and some supermarkets to self-destruct. One tried a mix of cooking and compering that ended with burned salmon, another made leaden jokes about Donald Trump. The audience gazed on, transfixed with horror.

Fickle fate had it that the chicken curry team won. Even the non-existent step-by-step menu, which was replaced with a single picture, was not enough to dissuade the judges. A nice man from HelloFresh was impressed with the flavour and the Co-op said something about using fresh vegetables.

Take-home lessons for the food industry and recipe kit makers? Nothing at all, but then that isn’t really the point.