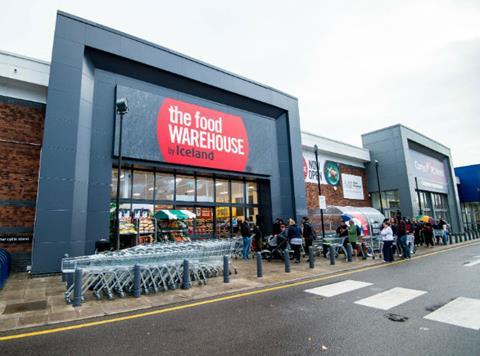 Iceland has opened its 900th UK store - a new The Food Warehouse in Bristol.

The supermarket chain has expanded its UK estate by 100 stores in just over four years, and has created more than 2,000 jobs.

“On 18 November it will be exactly 47 years since I opened the first Iceland store in Oswestry - and back then nine stores looked a towering ambition, never mind 900,” said Iceland founder & executive chairman Sir Malcolm Walker. “I am delighted that we have reached this new milestone as a distinctive British company with a unique culture, fantastic colleagues, and so many great products that you genuinely can’t find anywhere else.

“The Food Warehouse has grown to 53 stores from a standing start in just three years, and is winning many new customers for the group. The success of our new concept refits in the Iceland estate is also extending our appeal and delivering sales uplifts that give us confidence in our ability to open more new Iceland stores within the UK. We have proven that Iceland and The Food Warehouse can trade successfully together in a growing number of towns and cities, and we look forward with confidence to the future development of both store formats.”

Iceland said that 847 of its UK estate have been refurbished with new fascias and frontages, new product ranges, digital signage, improved in-store navigation and new checkouts.

Three further major extensions to Iceland stores are due to open before Christmas 2017. Iceland has also earmarked four further sites as part on an ongoing search for new UK store locations.

Walker added: “Our major investments of at least £750,000 in each new The Food Warehouse store and over £500,000 in each Iceland refurbishment underline our confidence in the future of our business, and I very much look forward to celebrating the opening of our 1,000th store around the time of Iceland’s 50th anniversary celebrations in 2020.”

The Food Warehouse MD Richard Walker told The Grocer exclusively last week that the fascia was planning to reach 400 outlets, growing at a rate of 30 new format stores a year.