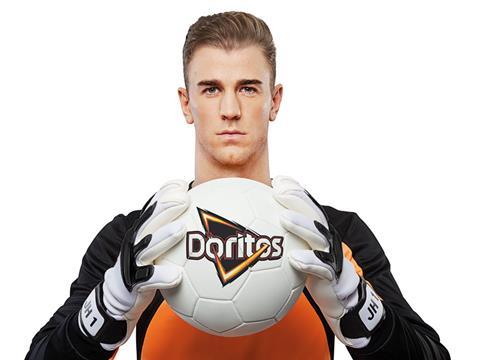 Doritos fans are being given the chance to try and score a penalty against Joe Hart.

The PepsiCo brand has unveiled its biggest marketing campaign of the year, encouraging groups of three consumers to submit a video of why they should be picked to take a penalty against the England goalkeeper.

Consumers can apply from the 6 April until 18 April, after which eight teams will compete in a live penalty shootout – with the final two going through to take a penalty against Hart and compete to win a trip to Europe. The competition is to be filmed and turned into a national TV advert that will be aired in May and June.

And from April until June, every Doritos single and sharing bag will contain a unique code that unlocks a chance to play a Doritos penalty shootout online game. Each goal scored results in a prize, and players can then choose to keep their prize or risk it and take another penalty. The first goal wins a free pack of Doritos, the second wins a cheque for £10 and the third £100.

“The on-pack promotion and penalty shootout competitions are built around the nation’s love of football and we expect them to be hugely successful, particularly as football fever sweeps the nation this summer,” said Doritos brand manager Taylor Jenkins.

The activity will be supported by a marketing push and in-store POS from this weekend, and the brand is introducing a limited-edition pack for impulse, Doritos Jalapeno Kick.