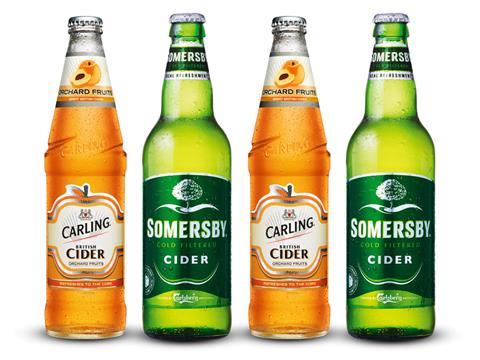 Carlsberg’s Somersby and rival flavoured cider brand Carling British Cider have been axed from the major supermarkets as several ‘British’ cider brands continue to lose ground to ‘flavour experts’ like Kopparberg and Rekorderlig.

The cull began in January, and by the end of September Somersby and Carling British Cider had completely disappeared from the major supermarkets’ shelves, with just a few Somersby lines still selling through Ocado, exclusive analysis by The Grocer using BrandView data reveals.

The brands continue to be available in convenience and the on-trade, and both brewers said they were performing well in those channels.

Carlsberg said it would, in line with its business strategy to focus on “value over volume”, continue to make Somersby available to off-trade customers, primarily in convenience.

However, the delistings in the mults have resulted in major losses, with Carling British Cider having seen £4.1m wiped off sales in the past year, while Somersby saw £5.3m flow down the drain [IRI 52 w/e 8 October 2016].

This translates to a 57.6% decline for Somersby to £3.9m and a 37.4% drop for Carling British Cider to £6.9m, with the remainder of sales coming through convenience, independent and forecourt channels.

The delistings follow AB InBev recently seeing £23m wiped off its beleaguered Stella Artois Cidre portfolio as it too fell prey to retailer rationalisation, with sales plummeting 40.4% to £33.9m [IRI 52 w/e 13 August 2016]. Magners stopped production of its flavoured cider portfolio at the beginning of 2016.

Flavour experts Rekorderlig, distributed and sold by Molson Coors in the UK since July last year, and Kopparberg continue to buck the downward trend in line with consumer thirst for brews perceived as ‘authentic’ and ‘craft’.

But things could turn sour for these in light of JD Wetherspoon chairman Tim Martin this week threatening to kick European ciders out of his pubs if senior EU leaders maintained a “bullying” approach to Brexit negotiations.