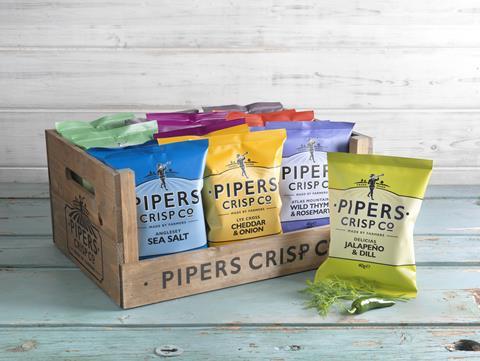 Pepsico secured a £20m deal for Pipers in November

Brexit uncertainty failed to dampen food and drink deal activity in 2018, though the value of deals during the year dropped markedly.

The sector recovered from a quiet start to the year to pick up activity in the second half, with the final quarter of 2018 ­seeing 58 deals completed, an increase of 13.7%.

However, the total disclosed value of UK food and drink deals last year slumped from £21.7bn in 2017 to £7.5bn last year.

Grant Thornton’s head of food and beverage Trefor Griffith argued this fall did not represent any increased Brexit concerns. Instead it was driven by a relative absence of isolated megadeals, he said.

Griffith said the key drivers of UK M&A in the sector remained undimmed as consumers shift to different products in terms of taste, format and convenience, as well as the appeal of consolidating in a still-fragmented market.

City dealmakers have already warned of a slowdown in 2019, as potential buyers hold out for more clarity.

Profits slid at Wetherspoons (JDW) for the half-year to 27 January 2019, as it was hammered by a £33m rise in labour costs.

Pre-tax profits dropped 18.9% to £50.3m for the year period, despite rising sales, as it was impacted by the increased cost of labour.

Sales growth accelerated for both bar and food sales, as the pub group reported a 7.1% jump in total revenues to £889.6m.

In its morning statement, the group added that it was impacted by the high rate of tax it pays, describing the disparity between the amount it pays compared to supermarkets as “unfair”.

Sales have improved in the current period, with like-for-likes in the six weeks to 10 March surging 9.6%, as it was aided by good weather, commented Wetherspoons chairman, Tim Martin.

The group also warned that costs in the second half of the year would be higher than in 2018, but said its trading expectations for the year remained unchanged.

“This may well have significantly adverse economic consequences, as the country turns in on itself to endure months, or years, of stifling constitutional argument.”

The Frankie & Benny’s owner saw total sales rise 1% to £686m, but hailed the opportunity for future growth from its recently acquired Wagamama chain.

Current trading is in line with expectations, the company said, and like-for-like sales are up 2.8% for the ten weeks to 10 March 2019

“We have made significant progress in 2018, acquiring a differentiated, high growth business in Wagamama, opening a record number of new sites in both our pubs and concessions businesses, and driving improved like-for-like sales momentum in the leisure business throughout 2018,” commented CEO Andy McCue.

“We now have a business that is orientated strongly towards growth and we continue to focus on delivering shareholder value.”

Continued uncertainty over Brexit yesterday resulted in a weaker pound, which buoyed the FTSE 100, moving up 0.4% to 7,185pts.

French hypermarket chain Groupe Casino (CO) saw shares slide yesterday after it raised its target from the sale of non-core assets from €1.5bn to €2.5bn over the next year.

However, Casino’s online partner Ocado (OCDO) was one of the day’s better performers, rising 2.6% to 1,102p.