The Grocer's view on the General Election 2017 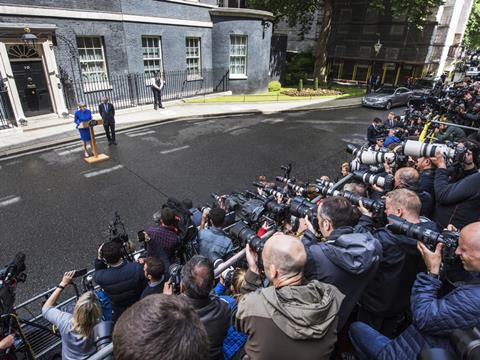 What next Mrs May? The Prime Minster addresses the press after returning from Buckingham Palace, where she received permission from the Queen to form a government

The Grocer has always been politically neutral. Our role, as outlined in Willliam Reed’s mission statement back in 1862, is to represent the grocery trade, “one of the most important branches of Commerce - one of the most indispensable wheels in the great machinery of the social life of civilized nations”.

This has involved twin obligations: providing readers with “the best obtainable information on certain subjects intimately connected and interwoven with the grocery business”; and standing up for the best interests of the grocery trade, “to expose and refute any unjust attacks made upon their fair fame as honest dealers by incompetent bunglers or malignant enemies”.

But in standing up for the trade it’s impossible not to mention the almighty Horlicks the Conservatives have plunged this branch of commerce into. Theresa May has followed David Cameron in committing political suicide. (As I write this she’s attempting to form a coalition government with “our friends in the DUP” in Northern Ireland, but she is a lame duck.) But who cares about their political careers? What matters is the chaos these “incompetent bunglers” have plunged this country into and the giant crowbar they have thrown into the “indispensable wheels” of our industry, with the markets crashing and the pound falling.

What business likes is certainty. It’s a chimera of course. There is no such thing in business or in life, with uncertainty caused by death and disease, technology and terrorism, war and weather. But politics and politicians are a particular source of uncertainty because they are always tinkering and meddling. And even worse than petty, ill thought out and ineffective regulations has been their unwillingness to do the jobs they are entrusted with, and instead asking the nation to keep making decisions for them over how they want to be governed and by whom.

The decision, for example, to reduce the extraordinarily complex issue of Brexit to a binary vote - “a once in a lifetime decision” as it was called - was a betrayal of the finely tuned and highly nuanced political system. And it now has all the hallmarks of a slow-motion car crash.

Ironically, Teresa May promised “strong and stable” leadership – and promptly called a General Election. And as if elections aren’t hugely damaging to consumer and business confidence, she did so with the clock to Brexit ticking.

And how could she promise stability anyway? She seemed to mistake her own resolve to crack on with Brexit, overcoming her own misgivings, for a collective acceptance of Brexit, when the truth is that 48.1% of the country had voted to remain in the UK. That’s not a recipe for stability. It shows a nation divided right down the middle. The people had spoken. But it was not with one voice. It depended who you listened to.

“Let me be absolutely clear” has been one of May’s stock phrases throughout her tenure as PM - usually preceding an evasive non-answer to a valid question. Like “Brexit means Brexit”, yet more hollow words.

So let me be absolutely clear Mrs May. There is no clarity right now. Only confusion. It’s not even clear if the uncertainty of a hung parliament is good news or bad news for sterling – some are suggesting , counterintuitively, that’s it’s good news, heralding a soft Brexit or even a second referendum. But it fell 2% this morning amid the chaos, and that was with HSBC already predicting (last week, before the election result) that the pound would reach parity with the dollar by the end of the year – a forecast predicated on another irony of this sorry affair, the fact the Eurozone is showing signs, independent of the UK’s paralysis, of stabilising.

What’s needed now? Industry voices have offered their thoughts here. But what’s needed for me is brilliant leadership and superb negotiation on multiple levels. And I can’t see any politician on either side of the political divide with that skillset. Maybe new politicians from the world of business will have to emerge to fill this aching void. Justin King perhaps?