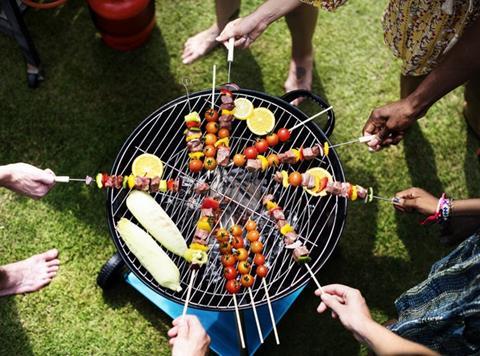 Food enjoyed a relatively upbeat April because of the warm weather over the Easter weekend, according to the latest BRC-KPMG retail sales monitor for April.

Food sales increased 1.7% on a like-for-like basis over the three months to April and 2.8% on a total basis – below the 12-month average growth of 3%.

The two-year average growth, however, which corrects for the Easter distortion, was 0.4% per annum, a slowdown from March’s equivalent of 0.9%.

UK retail sales in April increased 3.7% on a like-for-like basis compared with April 2018 when they fell 4.2% from the preceding year.

Over the three months to April, in-store sales of non-food items declined 1.7% on a total basis and 1.8% on a like-for-like basis – in line with the 12-month total average decline of 1.8%. The three-month and 12-month average growth rates for online were 4.1% and 6.2% respectively.

Non-food retail sales in the UK over the three-months to April, decreased 0.2% on a like-for-like basis and by 0.1% on a total basis – below the 12-month total average increase of 0.2%. This is the first time the long-term non-food trend turned positive since October 2017.

“Combining March and April, to iron out the shifting date of Easter, reveals 2.1% sales growth compared with the same time last year – 3.2% when including food-to-go.

“The sales mix at Easter is evolving rapidly with 28% of shoppers now seeking healthier alternatives to regular chocolate eggs, and for the main celebratory meal, chicken is now more popular than lamb amongst younger shoppers whereas 22% of under-24s planned to serve at least one vegetarian or vegan course,” she said.

Helen Dickinson, chief executive, of the British Retail Consortium, said: “Online accounted for a little under 30% of all non-food sales, and we expect this proportion to continue to rise. Nonetheless, the pace of growth has slowed over the course of the year despite the investment that many stores have made in their digital offering.

“Retailers are continuing to invest in technology across both physical and online activities as they seek to meet changing consumer behaviours, however some of such spending is being held back by the plethora of government-imposed business costs bearing down on the industry,” she said.

Government should review these costs and, in particular, reduce the burden of business rates if it wanted to see retail maintain its place as the main provider of highly valued, flexible jobs in communities up and down the country.

“Looking at sub-categories, food retailers were clear winners as families came together for festive feasts and even braved their first picnic or barbecue of the year.

“The long weekend also helped children’s toys and furniture sales, as parents looked to keep youngsters entertained as they returned to home and garden improvements.”

April may have eased the strain on retailers somewhat, he continued, “but we can’t overlook the fact that the new tax year also presents retailers with additional costs ranging from increased minimum wages to additional pension contributions.

“The task of balancing sales and a profitable margin remains crucial, especially given the widespread promotional activity currently,” he said.

Imperial Brands (IMB) shares slipped 1.1% in early trading despite announcing this morning it had built momentum in the half-year ended 31 March.

It said this was enhanced by the growing contribution of its next generation products (NGP) business.

The group continued to focus on its longstanding brand and market priorities in tobacco and it was delivering high margin sales growth.

Its “Asset Brands” continued to outperform and now represented two thirds of its revenue.

“We have made significant progress in building our NGP business with investment behind my blu generating awareness and consumer adoption, resulting in leading retail shares in most markets.

“We are building on this momentum in the second half focused on further omnichannel expansion and new product initiatives. We have set the foundations for accelerated revenue growth and we are on track to meet our full year expectations,” Cooper said.

Imperial said it had made positive progress in the first six months of the year as it continued to focus on building its NGP business and maximising opportunities in tobacco.

Expectations for full-year revenue, earnings and cash generation were unchanged and it expected to deliver constant currency revenue growth at, or above, the upper end of its 1-4% revenue growth range, driven by consistent growth in tobacco and an increase in NGP revenues.

In NGP, investment behind its blu Adoption Model was driving awareness, trial and repurchase. The company was continuing to invest behind brand equity, product initiatives and omnichannel engagement, all of which would support an acceleration in growth during the second half, it said.

The company announced that Jon Stanton, chief executive of Weir Group, would join the board with immediate effect and would be a member of the audit committee and success & nominations committee.

Malcolm Wyman, senior independent non-executive director, has decided to step down from the board “for personal reasons”. Therese Esperdy will succeed him.

Science in Sport’s (SIS) PhD brand has extended its Smart range with the launch of the vegan Smart Bar Plant, a high-protein plant-based bar.

The new product will debut at the BodyPower fitness exhibition in Birmingham on 10 May and will be sold through PhD’s retail channels, including Holland & Barrett and Amazon and through PhD’s own website.

The premium performance nutrition company said it had low sugar content and up to double the amount of protein compared with plant-based competitors and was designed for gym goers and sports enthusiasts following any diet including vegans, flexitarians and others seeking a “great tasting”, high protein bar.

It said Smart Bar Plant was approved as vegan by the Vegetarian Society and contained 100% natural and gluten-free ingredients.

Smart Bar Plant was addressing a rapidly growing market, it said, noting that the number of vegans quadrupled in the four years to 2018 (source: Vegan Society); the meat-free nutrition market was forecast to grow 44% to £1.1 billion between 2018 and 2023 (source: Mintel); and one in five UK adults are now following a flexitarian diet (source: Waitrose).

“Demand from gym goers and sports enthusiasts for plant-based products continues to grow rapidly from vegan, flexitarian, environment-conscious and other consumers. We see PhD’s Smart Bar Plant as a highly innovative product in this market.”

Net sales climbed 1.5% to €15.9bn at constant exchange rates, adversely impacted by the timing of Easter. Net income climbed 2.4% to €435m on the same basis.

Frans Muller, president and chief executive, said: “The execution of our Leading Together strategy is on track as our results are starting to illustrate.

“During the quarter, we also launched our new purpose: eat well, save time, live better. These are the guiding principles in everything we do as we execute on our strategy.

“Throughout our businesses we help our customers make healthier choices. Innovative solutions, both in-store and online, make shopping more convenient and less time-consuming. And to enable our customers to live better, we continue to support the local communities they live in.”

The FTSE 100 closed down 1.6% at 7,260.5p – a one-month low as traders in London had their first opportunity to react to US president Donald Trump’s comments over the bank holiday weekend about ramping up trade tariffs on China when the UK markets were closed.

Ralph Scozzafava, chief executive, said: “The first quarter was a productive period setting the stage for the sequential improvement in our performance that we expect to achieve throughout 2019. Adjusted operating loss is on-track with our internal full year plan and marked an improvement from the fourth quarter of 2018 but was significantly down compared with the year-ago period. Our results improved in each month of the first quarter and we are encouraged by the underlying trends that we are seeing in operations.

“While we continue to overlap certain customer volume that exited our system last year, we believe we have passed the inflection point as the transformative actions implemented over the past 12 months through our enterprise-wide cost productivity plan are taking hold.”

The company had “the right plan” that it was actively executing, which would improve our financial results. This plan would continue to drive and guide its actions throughout 2019 and beyond, he added.

“We have made significant progress integrating our operating model, right-sizing our cost structure and introducing innovative new products. As a result of these actions, we expect to deliver positive free cash flow for full year 2019. Importantly, we are turning the corner and expect to generate positive quarterly free cash flow for the second quarter.

“While our results demonstrate that our efforts are beginning to achieve the desired results, there is still much more work to do. The refinancing of our revolving credit facilities in the first quarter provides us with the resources necessary to drive our commercial initiatives and continue to execute our enterprise-wide cost productivity plan. As previously announced, we are also exploring potential strategic alternatives to accelerate our business transformation and enhance value for our shareholders, our company and all other stakeholders.”