Is there a good business case for installing new electric vehicle chargers? 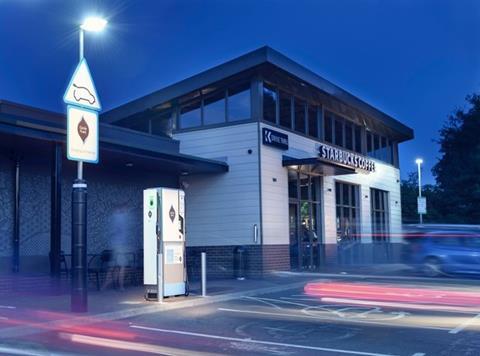 So how quickly will others follow suit? What are the costs? How compelling is the case?

In theory, there’s plenty of time. Electric and hybrid cars represent 1% of the 37.5 million vehicles on the road. And the government’s plan to scrap diesel and petrol vehicles as part of its £3bn clean air strategy won’t come in until 2040.

On the other hand, major car manufacturers Volvo and Jaguar Land Rover plan to stop selling petrol and diesel cars by 2020. And MFG isn’t prepared to wait. “The growth of the electric and hybrid vehicle market is an important part of the fuel mix,” says COO Jeremy Clarke.

The installation of rapid charge systems won’t be cheap, though, with a ChargePoint rapid charger costing around £50,000, excluding maintenance. For that you get a cloud-based platform providing management, control, billing, fault management, and maintenance information.

“But it’s a bit like saying how much it costs to put a new heating system into your house,” says ChargePoint MD Adam Bamberg. That’s because ChargePoint says it will actually fund a lot of the installations, “depending on how suitable the site”, says Bamberg.

“It’s more complicated than buying radiators, too,” he adds.

One issue is planning. ChargePoint says it can “dig a hole” for the charge points within four days, but installation can take up to eight weeks.

“It’s not just a case of turning up and plonking one in,” says Bamberg. “We have to contact the National Grid, local authorities, the distribution network operator, and the hosts themselves.”

So is all the hassle worth it? The economics are hard to calculate. The cost of a refill at a rapid charge terminal is typically charged at 30p/kw, so the cost of ‘filling up’ a Nissan Leaf for 100 miles is £3. (A Tesla will cost the same but for 200 miles.) A connection fee is charged on top of that (£1-£1.80), and an overstay charge of £10/hour is not uncommon. The profit on that sum will depend on a number of variables but that’s the same with fuel too, with the profit often deriving entirely from the groceries.

One thing’s for sure. With the terminal taking around 20 minutes to recharge a vehicle, it means forecourts will have to adapt their offering to accommodate motorists hanging around longer.

Association of Convenience Stores chief executive James Lowman says, currently, only about 11% of forecourts offer seating areas, and around 9% have customer wi-fi. “Forecourt c-stores are designed to allow customers to get in and out quickly, so offering charging points where customers will need to wait for a period of time means stores will also have to look at the facilities they offer their customers,” he says.

Ken Kay, owner and CEO of The Kay Group, is already building new sites big enough for the future “whatever that may be”. He’s also introducing WH Smith franchises, in addition to his Subway and Greggs franchises. “For someone to be able to spend 25 minutes at the charger, they need somewhere to sit inside,” he says.

But Kay thinks electric vehicle charging (EVC) penetration is going to take off slowly. “There are lots of issues to overcome. I think we need to see how it is going to evolve and what government legislation comes out.”