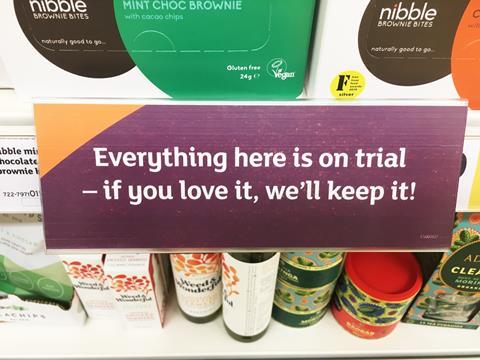 Independent brands offering genuine innovation are getting funded and onto supermarket shelves, such as in Sainsbury’s Taste of the Future initiative

“First to market always ends up under the bus.”

I remember the first time I was told this. It was the day I found out that Grasshopper porridge, the startup I had poured my heart and soul into, was being delisted at Waitrose following a massive marketing push by second-to-market Quaker.

Back then, the received wisdom in the food industry was that change happened slowly, that buyers were risk-averse, and that newness was good but only in small doses.

“Make the same things as other people,” I was often told. “Except better or cheaper.” Other favourites included “If it doesn’t exist already, maybe people don’t want it” and “If you have to educate your customer to want something, you’re in trouble.”

I’ll admit I’ve even been known to pass on advice like this myself to startups I’ve coached.

Recently, however, it feels like something fundamental is changing. The old dog of mainstream food retail is learning a new trick or two. Independent brands offering genuine innovation are getting funded and onto supermarket shelves – the kinds of brands that would have been warned off even trying for the big five ‘back in my day’.

Insect protein is a good example. My favourite is Eat Grub, a snack company with insects as their main ingredient which is smashing it on Ocado and at Sainsbury’s, where their volumes are already matching sales of beef jerky.

The number of vegan startups is also telling, with The Vegetarian Butcher and Vivera as well as newcomers like Meatless Farm Co having got their meat substitutes into supermarkets remarkably quickly.

One view on why this is happening is that at a time when large companies globally are being scrutinised more than they ever have been, engaging with smaller brands is a way for retailers to signal to consumers they are changing. Another is that thanks to social media, the information that retailers can access about genuine street-level demand is much more ‘live’ than the expensive Nielsen reports that they have previously relied on.

All this amounts to a changing atmosphere among startups. There’s genuine excitement that real innovation is at last compatible with funding, sales and rapid growth, that buyers are listening, that change is in the wind and if there is still a bus, that it’s electric and no one is going under it.

Fleur Emery is a startup coach