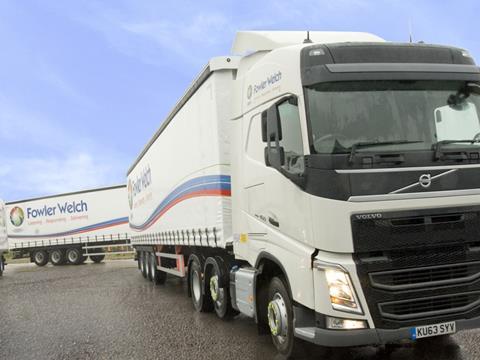 Fowler Welch saved 2,000 tonnes of carbon emissions across its fleet this year

Fowler Welch has slashed carbon emissions by 18% since 2012, saving 10,000 tonnes annually across the business as part of a crackdown on fuel consumption.

This follows the launch of a range of initiatives, including investment in warehousing infrastructure, increasing fleet miles per gallon and reducing electricity consumption.

The supply chain specialist installed telematics across its 450-strong fleet and created a driver league table recognising ‘good behaviours’ such as cruise control, braking control, and not overloading vehicles. This has saved 2,000 tonnes of carbon emissions across its fleet this year.

Fowler Welch has also teamed up with tyre retreaders Bandvulc instead of using new tyres, saving on the 496 tonnes of CO2 emissions required to create them.

This comes as part of a longer term investment to boost its green credentials.

In addition, it has saved around 500,000kWh over the past six years after it installed energy efficient air conditioning, updated its refrigeration to make it more energy efficient, and rolled out LED lighting which consumes less energy and lasts longer.

Fowler Welch also expanded its Teynham site near Sittingbourne, Kent in September 2016 by 50,000 sq ft to create 120,000 sq ft of temperature controlled space, allowing it to bring its entire packing operation in house to save mileage to and from packing sites.

In March 2017 it also created 10 bespoke automated pallet delivery trailers, which unload all pallets on a trailer within a minute in a bid to drive up speed of delivery.

The new design also offers a refrigerated trailer which fits on conventional forklift equipment, allowing customers to unload at any bays. Previously customers could not reload APD trailers unless in specific bays, meaning that many of the fleet returned empty. The move has allowed customers to load more pallets on their return, cutting fuel emissions per pallet by 40% since it was first introduced.

The savings were catalogued in the logistics operator’s first environmental and sustainability report published this week.

“We recognise the effects our operation has both on and off the roads and have taken a holistic approach to our environmental impact, identifying areas of improvement across the entire business,” said Fowler Welch CEO Nick Hay.

“One of the main successes we’ve seen is that of collaborating with our customers. By listening to their individual needs, we’ve been able to respond with innovative solutions and deliver tangible results that have contributed to their own environmental targets, benefiting the entire supply chain.”