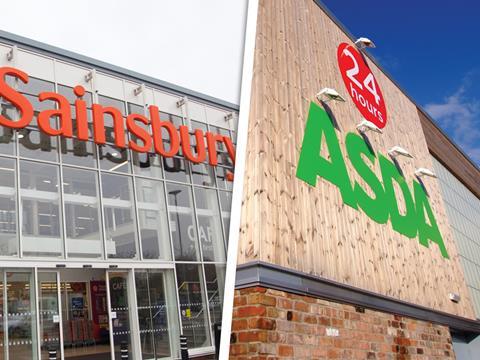 The UK Pensions Regulator is in “active discussions” with Sainsbury’s about its proposed merger with Asda and the impact this will have on both companies’ retirement schemes, the Financial Times (£). Frank Field, chairman of the House of Commons work and pensions select committee, called in a letter on Monday on Mike Coupe, Sainsbury’s chief executive, to seek approval for the tie-up from the Pensions Regulator.

Coupe, whom sub-editors at The Times £ have rechristened “Mark” in its headline, has meanwhile hit back at claims the merger would be bad for suppliers and raise prices. Coupe said his job was to “go to bat” for customers. The enlarged group would generate £350m of synergies through enhanced buying power, he said. The remarks came after Liberal Democrat leader Sir Vince Cable wrote to the Competition and Markets Authority (CMA), urging it to “bare its teeth”. The Daily Telegraph says politicians are pitching the deal as an opportunity for the CMA to prove its mettle but warns that getting under the skin of where the completion concerns lie is far from simple.

The Financial Times’ Lex (£) column, referring back to Coupe’s rendition of We’re in the Money, points out the song could not have been more apt: nothing elevates executive pay more than a big takeover, it says. But Coupe should beware – the chorus girls who belted out the ditty sung in the film Gold Diggers of 1933, were fired and their Broadway show failed. The Guardian says that nobody seems to have noticed, but after the We’re in the money riff Coupe added a little “do do dah do do, dah do dah, dah do dah do” line – which the newspaper says sounds an awful lot like the “This is the self-preservation society” bit from the film The Italian Job. Coupe’s crooning attract further interest in The Times (£) with the help of the Twitterati with other tracks suggested, such as It Asda to be you, Walmart again, don’t know where, don’t know when, and Aisle be there. Staying with a musical theme, The Daily Telegraph says Doug McMillon, the boss of Walmart was simultaneously reciting another song from the musical 42nd Street: Boulevard of Broken Dreams in reference to the Asda owner’s apparent “UK retreat”. The Daily Mail points out Coupe once serenaded a colleague dressed as a giant prawn with a rendition of James Blunt’s You’re Beautiful in front of 5,000 Sainsbury’s staff to encourage them to sell more seafood.

The Daily Mail says it was “a cabal” of former Asda executives who previously worked alongside Coupe who were instrumental in orchestrating the Sainsbury’s offer. It included Asda boss Roger Burnley and Walmart’s international boss Judith McKenna, who joined them in Leeds yesterday at Asda’s head office, and McKenna’s predecessor David Cheesewright, a close friend of Coupe. Coope addressed 2,000 employees in Leeds and a further 1,500 via video link, touching on the challenges facing retailers and the benefits of a 330,000-strong team of Asda and Sainsbury’s workers.

The Financial Times (£) homes in on the Yorkshire town of Keighley in an analysis of the Sainsbury’s/Asda proposed tie-up. Coupe, who has been collared to lead a combined giant, has made play on the fact that stores will not close, yet it was Coupe who drew attention once to the fact that if he stood in his own car park, an Asda, Iceland and Aldi could all be seen.

The same article further highlights yesterday’s Kantar Worldpanel market snapshot for the 12 weeks to 22 April when Lidl emerged as the fastest growing UK supermarket with sales up 9.1% and market share hitting 5.4%. Sainsbury’s and Asda’s market shares are smaller than they were a year ago. The report, however says that the German discounters’ growth rates have slowed since 2014 partly because the main supermarkets have fought back on price.

The growth of the discounters and their role in the marketplace will be a key factor in any regulatory examination of the Asda-Sainsbury’s deal, it says. In a separate article on the Kantar Worldpanel figures, the Financial Times (£) notes that Tesco’s increase in sales was 2.1%, while Morrisons came in at 2.2%. The overall industry grew at 2%. Aldi grew 7.7%. The Times (£) adds that Nielsen separately, said that unpredictable weather had disrupted grocery spending, with overall supermarket sales rising by 1.2% year on year in the four weeks to 21 April. The Daily Telegraph notes the Kantar Worldpanel statistics added to growing concerns about the impact of the planned combination of Sainsbury’s with Asda as the figures indicated about 9m household shopped at both grocers over the past three months, controlling about 31.4% of the market between them.

A group of Nisa shopkeepers, calling itself “Justice for Nisa” is making an 11th-hour attempt to stymie the Co-op’s £143m acquisition of the convenience group, reports The Guardian. The rebels have recruited a solicitor to represent them at a court hearing in London on Friday to approve a scheme of arrangement. Justice for Nisa is thought to represent 20-30 shopkeepers.

Just Eat’s revenues propelled 49% to £177m in the first quarter compared with the same period last year and UK orders rose 24% to nearly £30m – buoyed by the acquisition of Hungryhouse at the end of January and the inclusion of half of the Easter weekend in the quarter, reports the Financial Times (£). The Times (£) points out that the group has carried out little delivery until now, providing only an online ordering service, but its recent entry into the fast-food market has forced it to change tack, pitting it against Deliveroo, Amazon and Uber Eats. The Independent says arguably the biggest threat to Just Eat is whether its restaurant clients ever try to revolt over the steadily rising piece of their pie it has been taking and says competition regulators need to keep a close eye.

Archer Daniels Midland has signalled that its long awaited profitability recovery had finally arrived, reports the Financial Times (£). The agricultural commodities trading behemoth said its oilseed business was likely to report more than $1bn earnings this year. It announced net income of $396m in the three months to March, up from $340m in the same period in 2017.

Factory activity fell a full points to 53.9 in March on the purchasing managers’ index, fuelling fears the economy may be faltering, says The Times (£). Forecasts had been for 54.8. It makes an interest rate rise less likely, says the report.

Brewdog has revealed Dragons’ Den producers turned it down in 2009 after it made it past the initial application process. The Times (£) says it would have offered a 20% stake for a £100,000 investment, which would have been worth £360m today.

Morgan Stanley analysts have warned that like-for-like sales could decline at B&M European Value and it could struggle to hit its target of 950 stores, The Times (£).

A recovery in paper prices and the continued growth of online shopping, which has boosted demand for DS Smith’s packaging has helped buoy the company. It said in an update that in the year to April 30, it had increased its share of the market by targeting multi-national customers, particularly internet retailers and delivery firms, The Daily Telegraph.

Mary Portas, “Queen of Shops”, talks about the problem with aggressive leadership, clashing with government ministers and why The Apprentice is the “most hideous show on TV”, in The Guardian.