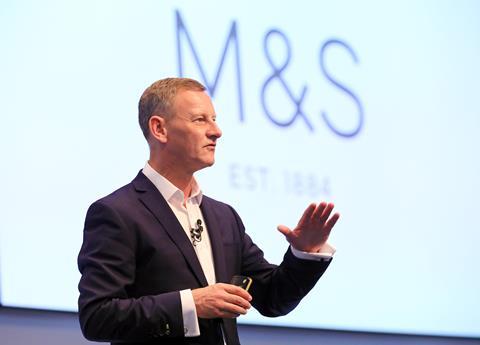 M&S profits dive amid chairman Archie Norman’s scramble to close stores, writes The Times (£) as the retailer accelerates plans to close stores, setting it on course to shut 100 outlets by the end of 2020, almost two years ahead of schedule (The Times £). Marks & Spencer is speeding up its store closure programme with plans to shut 100 by the end of 2020 – two years ahead of schedule (The Daily Mail).

“I believe  that we can make M&S special again” CEO Steve Rowe tells The Telegraph. “We’re very clear, and everybody should be, we have to change our shop estate – because if we don’t it will kill us eventually,” he says. The boss of Marks & Spencer has pledged to “fix the business” as the embattled chain prepares to unveil another slump in profits and further falls in sales of its clothing and food ranges (The Telegrpah).

Marks & Spencer executive Steve Rowe will this week attempt to draw a line under a decade of deteriorating performance at the retailer with the promise of ‘accelerating change’ (The Daily Mail). Marks & Spencer’s annual results on Wednesday will be its first public appearance before the City since it detailed the Ocado tie-up in February (The Times £). Investors will find out this week whether Rowe’s claim that management are “going bloody fast” at scrutinising and changing the various parts of the company is really true (The Guardian).

Just Eat is in danger of being demoted from the FTSE 100 for the second time in six months after the revelation that its rival Deliveroo had won backing from Amazon sent its shares tumbling. (The Times £)

Amazon now seeking to use its logistics skills to challenge in other markets, writes The Daily Mail’s Alex Brummer. “Britain’s grocers – M&S, Waitrose, Sainsbury’s et al – were groundbreakers when it came to ready-prepared meals for millennials. Deliveroo, Just Eat and others go one step further by offering consumers a huge choice of cuisines online, delivered to the door hot. Anything they may lack in logistics and software skills will now be strengthened by the Amazon approach.” (The Daily Mail)

The chairman of John Lewis Partnership has been forced to defend its rebranding amid criticism from staff that it is misleading to call them co-owners. (The Times £)

Carrefour, Europe largest retailer, is exploring the sale of a minority stake in its loss-making business in China and has started sounding out potential buyers. (Reuters)

Five years after offloading its pharmacy chain during the depths of its financial crisis, the Co-op has returned to the health sector. The digital pharmacy venture was launched at its annual shareholder meeting in Manchester on Saturday. (The Times £)

Domino’s Pizza was off the menu for investors yesterday after UBS recommended that clients should sell the company’s shares because of increased competition, weaker consumer confidence and its dispute with franchisees. (The Times £)

Fever-Tree is launching a range of pre-mixed gin and tonics as it looks to continue its stellar growth. (The Telegraph)

Millennials are planning to put the brakes on their fashion spending for the first time since the recession, a potentially worrying sign for the fast-fashion retailers that have been boosted by the spending power of the Instagram generation. (The Telegraph)

Big Food is getting in on the act as the emergence of plant-based substitutes opens the door for meat market disruption. (The Financial Times £)

With China poised to cull a third of its pig herd due to African swine fever, a Hong Kong-based entrepreneur is hoping to step into the gap with a plant-based pork product he hopes will replicate the success of Beyond Meat and Impossible Foods. (The Financial Times £)

John Menzies has become the latest company to face shareholder opposition to its remuneration report after nearly 23 per cent of votes were cast against it. (The Times £)

As the UK’s Food Standards Agency calls for better labelling over allergens, the FT says the watchdog’s proposals raise questions about higher costs and cross-contamination. (The Financial Times £)

The FT looks at South America’s abandoned farms behind the global coffee craze. Amid record crops and rising prices for consumers, some growers are unable to cover their costs. (The Financial Times £)