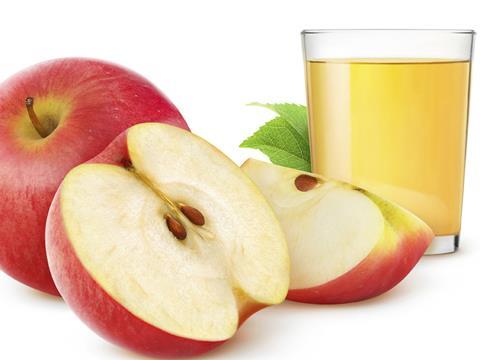 Apple juice prices are set to tumble as juice makers take advantage of a record crop and glut of extra apples that would normally be exported to Russia.

The price of apple juice concentrate juice has fallen 16% year on year to £989/tonne, according to Mintec.

Lower concentrate prices are likely to relieve pressure on manufacturers and prompt a spurt of promotional activity, experts predict. Retail prices are also set to ease.

“There will be more apples available for the UK market and prices will be cheaper,” said Alan Leal, purchasing director of processed fruit supplier Cobell. “There’s a lot of apples out there and the apple market will remain low - and retailers are likely to bring the price down for the consumer.”

Apple juice prices are falling because bumper crops are expected across key apple-growing regions in Poland, Northern and Central Europe. The World Apple and Pear Association estimates this season’s crop will tip 11.89 million tonnes - around 12% more than the average of the last three seasons.

On top of that, Russia’s ban on western foods, including apples, is further pushing down prices as producers have to look for alternative markets.

Poland, one of the EU’s largest apple producers and a key exporter to Russia, had already seen apple stocks rise by 165%, Mintec said.

Developments in apple juice are in stark contrast to the orange juice market, where prices are soaring.