Butter and cream prices on the rise following heatwave 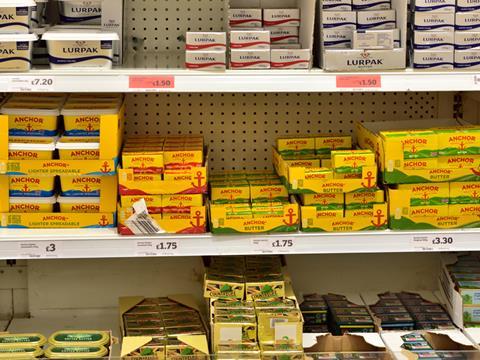 Supermarket prices for butter and cream are on the rise again following warnings over the impact of the heatwave on production costs for British dairy farmers.

Supermarket cream prices have also risen by 1% month on month, putting them 9% higher than last year. Asda has this week hiked prices on a range of own label SKUs including a 125ml pot of fresh double cream, up 7p to 77p, while Morrisons in June added 10p to its own label Healthy Soured Cream 300ml and own label Premium Extra Thick Jersey Double Cream 284ml, now £1.10 and £1.45 respectively.

It come after experts warned price increases on key dairy commodities, including milk, were “inevitable” due to prolonged spells of hot and dry weather this summer.

Poor grass growth means farmers have been forced to supplement with forage, which was already in short supply following last winter, and feed wheat prices hit £174.40 per tonne in the week ending 2 August [AHDB], an increase of £32.30, or 22.7% on 2017.

To reflect rising costs in the supply chain, all of the major milk processors have increased their farm gate prices to near the 30p per litre mark. “The lack of forage is a real challenge for dairy farmers - it’s pushing up the cost of production, and as sure as night follows day, retail prices will follow the cost of production in the end,” warned John Allen of agricultural consultancy Kite earlier this month.

The mults have yet to move on standard milk SKUs, with a four-pinter of own label ­pasteurised milk still £1.10 on average, while a two-pinter is 82p and a six-pinter is £1.50.