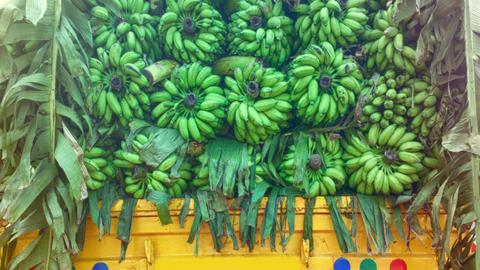 Can food tariff cuts really put a dent in inflation?

Why do we have tariffs on bananas? So asked prime minister Boris Johnson last month, first during a 9 June speech in Blackpool and then three weeks later while in Madrid for a Nato summit.

By cutting “food tariffs we don’t need”, the government could put a dent in what was already the highest consumer price inflation in four decades, Johnson claimed, speaking in the Spanish capital a week-and-a-half before his eventual defenestration.

So can it work?

As an inflation-busting measure, cutting tariffs on food imports was always going to be a long shot. And that’s even if the proposals are retained by whoever wins the Conservative Party leadership knife-fight.

In the first place, while the UK imports almost half the food eaten in the country, most of that foreign-sourced fare already enters tariff-free.

Consequently, the broader impact on inflation of further tariff cuts would be for the most part negligible, though there could be some price falls in specific categories, says the British Retail Consortium.

“Proposals to remove food tariffs are unlikely to slow shop price inflation, as only a fraction of goods sold in UK supermarkets attract tariffs,” says Andrew Opie, BRC director of food & sustainability. He adds that “most produce is harvested here in the UK or imported from the EU or developing countries, which have zero tariffs”.

According to recently published estimates by the University of Sussex’s UK Trade Policy Observatory, “only about 10% of [the UK’s] food imports faced tariffs in 2021”, with much of those goods coming from Brazil, China, Thailand and the US.

And a good chunk of the tariffed imports will be primary or commodity food, going by BRC estimates that only 2%-3% of food sold in UK supermarkets is taxed at the border.

Johnson’s proposals have won some support, with importers of fruit & veg and olive oil surmising they could cut sourcing and production costs and in turn soften prices for consumers. But others, such as the Rice Association, say they could undermine Britain’s domestic rice processing sector.

Either way, to Tim Lang, emeritus professor of food policy at City University London, the government’s food tariff gambit shows it “doesn’t know what to do about the cost of living food crisis”.

Global primary commodity prices began climbing two years ago as pandemic lockdowns disrupted commerce in and between nations. Since then, a vortex of energy price rises and surging related costs, such as transport and fertiliser, have fed into price rises for consumers the world over.

The UK recorded a 30-year CPI high of 5.4% in December, before the war in Ukraine made matters even worse, with inflation by May topping 9%, the most in four decades. Kantar this week put domestic grocery price inflation at 9.9% over the four weeks to 10 July.

There is little chance of tariff cuts acting as “a silver bullet” for such a “complex set of circumstances and arrangements”, says Lang, author of Feeding Britain.

The Institute of Export and International Trade this week warned inflation in the UK faced further trade-based stress, against which food tariff cuts would barely register. Citing ONS data, it said there had been “a dramatic increase in the cost of imports against a decline in volumes”, with the ensuing “price pressures” likely to “feed through to what consumers have to pay”.

Marco Forgione, the institute’s director general, says: “Given it is so difficult to tell just where price pressure these days is coming from, be it from energy costs or labour shortages or the war in Ukraine or the impact of the pandemic, the role of tariffs in that would be impossible to figure out.”

Johnson’s tariff proposals may have been another opportunity for him to bring bananas into the public square, more than two decades after his tenure as a reporter in Brussels, where he quizzed EU officials about rules he took to mean a ban on straight bananas. But now, against a backdrop of complex and tangled inflationary pressures, his latest banana gambit seems unlikely to bear fruit.