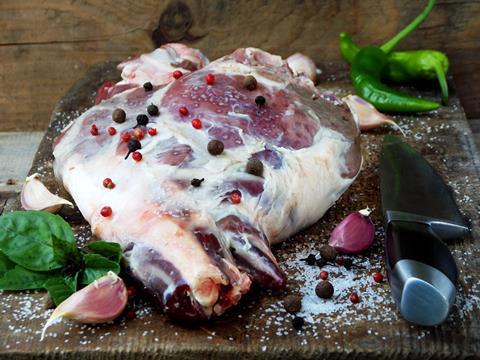 Lamb risks losing out this Christmas as farmgate prices run high in the wake of the Brexit vote.

UK lamb prices were up 14.9% year on year to £3,874 per tonne in October [Mintec], having hit record year-on-year highs this summer.

“Prices for UK lamb usually start falling from June throughout the summer, but because of the fall in the value of the pound, our exports were more competitive and we imported less from New Zealand,” says Mark Kozlowski of Mintec.

“We also had fairly low production in the UK this summer and as a result prices went well above their normal levels for that time of year.”

Although the UK lamb crop was higher than last year, poor pasture over the summer meant lambs were slower to finish off and come to market. “Because of that we have more lambs left to go through between now and the end of the season next May. So we expect to see more British lamb produced in the next six months,” says Kozlowski. But while farmgate prices have fallen in recent months as more UK lambs came through, they remain “well above” last year, and started picking up again last week in the run up to Christmas.

Prices for New Zealand lamb, meanwhile, are up 30.3% year on year to £3,374 per tonne [Mintec] despite a drop in prices in NZ$ terms. “Before the EU referendum there was a £1.50 premium between deadweight lambs in the UK and deadweight lambs from NZ. Now you are looking at 50p/60p in sterling terms,” says Kozlowski.

Higher prices for both UK and NZ lamb are threatening to push up retail prices - putting lamb’s spot on festive tables at risk. “Volumes at retail level have fallen in recent months and we think this is because the price of lamb has been going up while the price of other proteins has been relatively low,” Kozlowski adds.