Pizza is pricier due to higher cheese costs

Shoppers could soon have to fork out more dough for their pizzas thanks to a 15% hike in the cost price of a margherita.

Price rises on cheese and processing tomatoes are mainly to blame, and have added about 7p to the cost of a 350g pizza over the past year.

The main ingredients of pizzas, not including toppings, are wheat, tomato purée and cheese. Wheat is the biggest constituent by volume, accounting for 40%, cheese is between 30% and 40%, and tomato purée roughly 5-10%.

However in cost terms, cheese is the biggest factor by far, accounting for about 80% of the total cost. The price of almost all cheese has shot up over the past year due to low levels of milk production in the first half of 2013 and high global demand for dairy. The wholesale price of mozzarella, the most common cheese in pizza, is up 19%, with the highest price reaching £3.33/kg in November 2013.

The price of tomato purée has also jumped, rising by 12% - an additional 5p/kg - in the past year. Prices have risen because adverse weather in the major producing regions of the US and China caused a 2% fall in production to 32.5 million tonnes in 2013, following an 11% fall in 2012. At the same time, demand has remained high, outstripping supply.

Wheat, on the other hand, has become cheaper - falling 27% year on year to 17p/kg - but because it accounts for only 5% of production costs, this has not translated into major cost savings for pizza makers.

The outlook for 2014 is more promising. The warm summer last year helped produce high levels of milk, which has led to dairy prices, including cheese, starting to fall. Mozzarella is now £3.15/kg, down from £3.33/kg in November.

Exceptionally dry weather in Brazil, the world’s largest producer of sugar, is causing concern about tight supplies. As a result, prices have edged up over the past month, though they remain down on a year-on-year basis.

Dry weather in Brazil is also pushing up arabica coffee prices month on month. Production volumes are now expected to fall by 4% in 2014, to 5.2 million tonnes; prices have risen by 17.1% over the past month as a result, though they remain down year on year.

Copper is down both month on month and year on year. Prices are falling ahead of data releases from China - the world’s largest consumer of copper - which are expected to show a slowdown in the country’s economic growth. 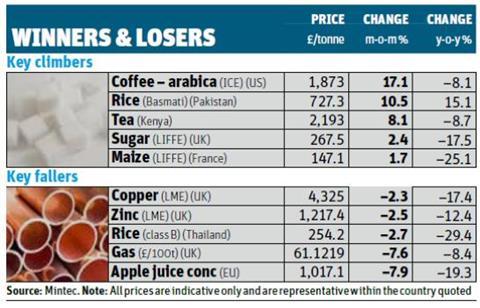