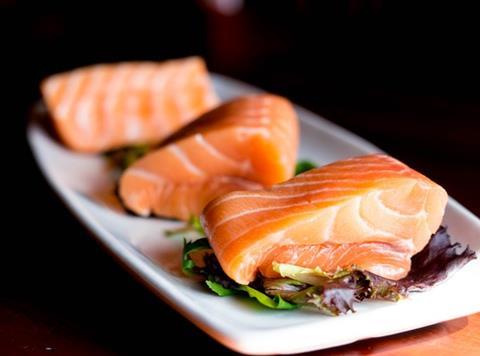 Wholesale salmon prices have eased from record highs earlier this year, although a surge in Christmas demand could push them up again this month.

Norwegian salmon prices peaked at £6.99/kg in May 2018 [Mintec] as supplies tightened across Europe. “The price during this period was a record price, but this was a result of weak supply following zero volume growth from European producers,” says Hans Frode Kielland Asmyhr, UK director of the Norwegian Seafood Council. “It was also a weakening of the Norwegian krone vs the euro in combination with demand growth.”

However, prices have trended down since September due to strong volume growth from Norway, where lower temperatures meant production recovered from the sea lice outbreak that has plagued farms since 2016. By November, they had dropped to £4.88/kg [Mintec].

“The salmon supply from Norway to the EU in October was up 10% year on year,” adds Mintec analyst George Duke. “Feed sales in October also increased 6% month on month, which is an indicator of a greater supply of fish.”

This easing of salmon prices could be short-lived, though, Duke warns. “The expectation in the market is that the Christmas demand should see prices increase in December.”

Producers faced fewer problems with sea lice this year, but the issue of the parasites in commercial stock has not yet been “completely eradicated”, he warns. “What we have found is that sea lice have started migrating further north to colder Norwegian climates,” he says. “We believe this can be directly correlated to a rise in global sea temperatures.”