The deepening crisis in Ukraine sent grain prices soaring this week, raising fears of a repeat of 2012 when a drought in the country contributed to a spike in global prices.

On Monday, news of the Russian military build-up caused UK wheat futures for May 2014 to rise by £5.25/tonne to £162/tonne - the biggest daily movement in the contract since July 2012.

The nervousness in international markets is a reflection of Ukraine’s importance as a producer and exporter. It produces as much corn as the rest of the EU put together. According to banking group Macquarie, its share of global exports is 13% for corn, 5% for wheat, 56.5% for sunflower oil and 10.5% for rapeseed.

For the moment, the crisis has yet to disrupt exports or agricultural production. Sea ports continue to function and plantings, which have just started in Crimea, are ­progressing as normal.

“Agriculture still hasn’t been affected, even in Crimea and south regions,” says Macquarie analyst Kona Haque. “Plantings were going in line with a plan, and there was no slowdown in export.”

However, there is widespread concern that buyers will choose not to buy from Ukraine because of the political uncertainty, increasing demand for grain elsewhere. The country still has significant volumes of corn to sell from last year’s harvest.

“An important factor will be if new sales can be maintained or whether traders and consumers take a safer approach and move demand to other origins such as the US and South America,” says AHDB analyst Jack Watts.

Most analysts are confident plantings will progress normally. More worrying is the possibility of an escalation of the crisis and sanctions against Russia.

“If that happens, we could have a repeat of a couple of years ago when prices spiked after a big drought in Ukraine and Russia,” warns NABIM director general Alex Waugh.

The political crisis in Ukraine has focused attention on the grains and oilseeds markets over the past week, but on a month-on-month basis, coffee continues to stand out as the key riser in our commodities tracker. Arabica has gained nearly 30% over the past month, driven by concern about dry and hot weather in Brazil, while Robusta is up 10.3% month on month. 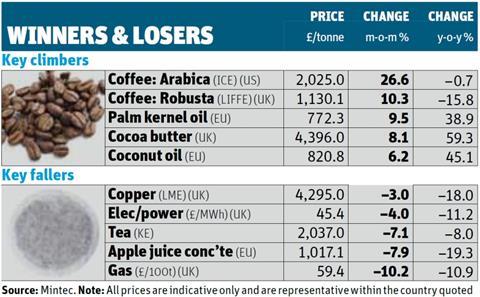 Coconut oil also remains elevated, as the impact of Typhoon Haiyan on production in the Philippines continues to weigh heavily on the market.

Tea prices are still falling - down 7.1% on last month and down 8% year on year - thanks to improved supply from Kenya, while copper is down because of a slowdown in the Chinese economy.

Crop diversity warning: A study in the journal PNAS has warned that over-reliance on a small number of key crop species is putting global food security is at risk. Wheat was now a key food in 97% of countries captured by UN agriculture data, the authors said.

Grain passports: The Road Haulage Association is working with the AHDB/HGCA and the UK government on a new system of electronic grain passports, designed to ensure grain is transported hygienically. A pilot of the passport will run for 12 months from April.

Openfield results: Grain co-operative Openfield has reported its turnover fell by 8% to £710m in the year to 30 June 2013 as a result of challenging market conditions following the poor 2012 harvest. Its pre-tax profits fell from £2.6m in 2012 to breakeven in 2013.