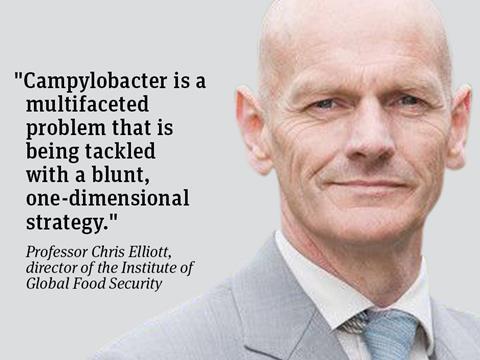 The countdown is on for the next round of the FSA’s ‘naming and shaming’ on campylobacter, due in mid-November.

For some time I have wondered - and indeed asked - the FSA why it is singling out retailers in its fight against campylobacter. The answer has been: “This is the type of pressure that gets results.” And, in fairness, the number and severity of cases has reduced, albeit at a slower than desired pace, and I expect this trend to continue.

But given the reductions in campylobacter rates in retail chickens, I wonder why the statistics show no signs of a reduction in cases of human illness.

Perhaps it’s because a multifaceted problem is being tackled with a blunt, one-dimensional strategy. Over the past year or so, there have been ‘silver bullets’ mooted to solve the problem: rapid surface chilling, increased farm biosecurity, zero thinning and improved packaging, to name some. Will any single one be the solution to this highly complex global problem? Very unlikely. But put them all together and, yes, the industry is finding ways to reduce campylobacter.

But the FSA focus on retailers has left an elephant in the room. We consume an awful lot of chicken via foodservice, yet as far as I am aware no sampling has been undertaken here. When I asked the FSA why this was the case, the reply was it is too difficult to organise. I also asked why we haven’t yet seen a nationwide campaign for storing, preparing and cooking food safely. The answer indicated the government doesn’t really like campaigning departments any more.

This is exactly what the FSA did - and very well. ‘5 a day’, ‘reduce salt’ and ‘traffic lights’ are all distant but fond memories of important interventions.

With even more budget cuts on the horizon for an under-resourced FSA, I don’t expect too many campaigns in the near future. I do, however, expect to read about more multiple cases of campylobacter poisoning and about our escalating obesity crisis. Perhaps it’s time to count the cost of these to the public purse, our economy and wellbeing.