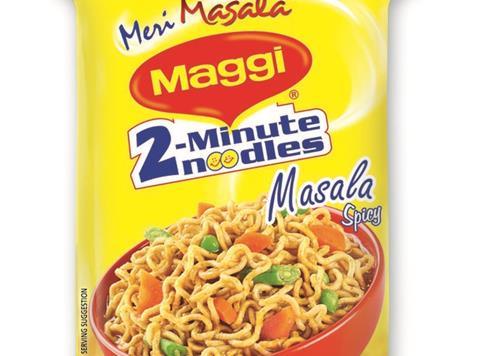 Food safety chiefs have given the all-clear to Nestlé Maggi brand noodles sold in the UK.

The Food Standards Agency had ordered tests on Maggi noodles in the UK following reports that products sold in India contained high levels of lead.

Today (1 July), the authority announced that more than 900 UK samples – tested by local authorities, port authorities and Nestlé itself – were found to contain levels of lead “well within EU permissible levels”, adding consumers had no reason to be concerned.

While only one flavour of Maggi 2 Minute Noodles - masala - was imported from India to the UK and Ireland market, other flavours of noodles had been tested as a precaution, said the FSA.

Nestlé has maintained that all its products were ‘absolutely safe for consumption’ but pulled its Maggi noodles from shelves in India following reports by some Indian states that testing had detected high levels of lead and undeclared monosodium glutamate.

“Recent developments and growing concerns about the product have led to confusion for the consumer to such an extent that Nestlé India felt it was necessary to take the product out of the market while we engage closely with the regulators and others to discuss the situation,” the company said in a statement.

Writing in The Grocer last week, Chris Elliott - director of the Institute of Global Food Security at Queen’s University, Belfast – questioned the motives behind the actions the Indian authorities.

“In my opinion the Maggi noodles saga smells - and the odour is not a pleasant one,” he wrote. “I have collaborated with the Nestlé food safety group for a long time and I know how professional they are. They are tasked with protecting the consumers of all Nestlé products as well as the reputation of a global brand and are extremely diligent in what they do.

“So can it be as simple as the Indian authorities covering up some dodgy testing? I doubt this and wonder if it is more to do with some high politics kicking in.

“Strangely, the Indian authorities have also decided to recall Unilever’s Knorr noodles, despite stating there is no food safety issue at all. One can only wonder if some form of protectionism is going on here and if shelves will be restocked with Indian-owned brands.”