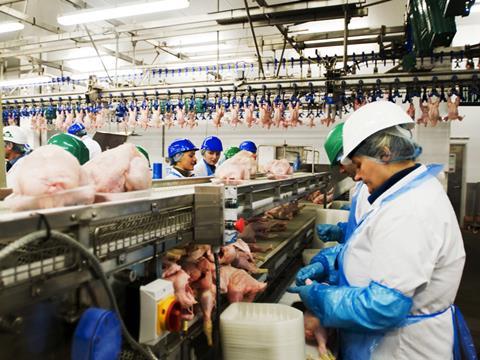 One of the 2 Sisters’ processing plants

Investigations into the 2 Sisters poultry business found no evidence of serious hygiene breaches or fraudulent activity, the FSA has revealed.

The FSA’s investigative report into 2 Sisters, published by the Efra Committee today, confirmed there were “some weaknesses in compliance with official controls” at the group’s 17 cutting plants. However, there was no evidence of regulatory breaches serious enough to prompt enforcement action beyond verbal warnings.

“At no point during the investigation did we find activities in place that led us to issuing enforcement notices nor suspending approval for the production or distribution of poultry from these cutting plants,” the report said.

Intelligence gathered by the National Food Crime Unit and shared with local police forces did not lead to any criminal investigation into the company, it added.

As part of the investigation, FSA veterinary staff and members of the National Food Crime Unit reviewed around 500 hours of the company’s CCTV footage from Site D, which was implicated in the ITV/Guardian report.

The footage showed evidence of “sporadic poor hygiene and bad practice”, but this did not represent “widespread systematic failures” at the plant, the FSA said.

There was also no CCTV evidence of date labels on trays being changed, returned product being repackaged and sent out again, or by-product being picked up from the floor and put back on production lines.

The footage did show cleaners occasionally placing meat that should be disposed of as by-products into a bin, or a conveyor leading to a bin, but the use of the bin content could not be established from the CCTV, it said.

The FSA’s investigation identified several “areas of concern which required FBO management attention” and “raised questions over the company’s focus on hygiene, traceability, labelling, training and its culture” the report noted.

However, it praised 2 Sisters for “promptly” resolving these issues and making voluntary changes to strengthen its controls and improve management culture in relation to food safety and hygiene standards.

The FSA is now planning to phase out its permanent presence at 2 Sisters sites, and will use the company’s publication of its audit data as a pilot to help drive better transparency across the meat sector.

“For the improvements the company has made to be sustainable, the company’s journey to a better corporate culture must continue,” it said. “2SFG appears to have embraced ‘openness’ and this may go some way to giving assurances that the company is serious about continuous improvement.”

Welcoming the FSA report, a 2 Sisters spokesman said the company “fully supported” its outcomes and recommendations.

“Not only did we act swiftly on remedying the situation once alerted last year, we have led the way with new initiatives to ensure trust and transparency are maintained within the industry,” said a spokesman.

“For example, we are the only UK food business to publish all of its audit outcomes and are introducing independently monitored CCTV at all of our cutting plants.

“We look forward to continuing an open and positive dialogue with the FSA and other regulatory bodies.”