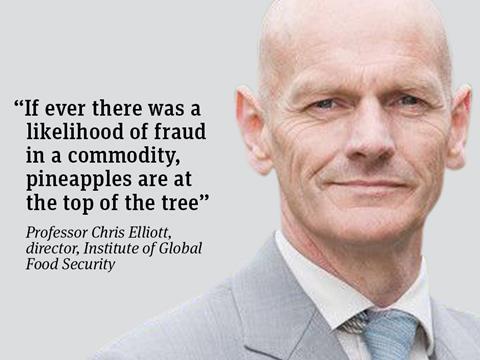 I’ve just returned from a tour of South East Asia. Building research collaborations, giving a few lectures and recruiting high-quality international students for my university - not unusual activities for academics these days.

Before departing I read the excellent article on coconut water (27 August, p30) by Julia Glotz. So, during my trip, I discussed coconuts with anyone who would listen - which was not difficult! On many street corners sat elderly people selling fresh coconuts. With the impressive machete skills they would open the nut, insert a straw and accept a few pennies. No wonder the potential to convert what was generally thought of as waste (the water) to a high value-added product has attracted quite a few businesses.

Quite a few of us Brits now think of this water as an elixir of life and are willing to pay a hundred-fold the street value in Ho Chi Minh City for a carton. So what about quality control and fraud, I asked? I was quite amazed at how much effort is going into these two issues. Large companies exporting to Europe have taken substantial measures to control the quality and integrity of coconut water. The biggest factors appeared to be the great variation in the nutritional composition due to the regions from which the coconuts were harvested and the time they were picked. Listening to the efforts they were taking to try and produce standards of nutrition to put on labels was really quite reassuring. Also trying to stop ‘rogue traders’ from cashing in on low-quality and adulterated coconut water was at least on their radars, though I was less reassured they knew how to control this.

Discussions moved on to pineapples. The crop in Thailand had failed for a second time in a row. Climate change and non-sustainable farming methods were being blamed. The livelihood of many subsistence farmers seemed to be in jeopardy. My thoughts then turned to fraud. I reckon there will be plenty of opportunities for diluting pineapple juice with sugary water or some other type of ‘fruit juice fraud’. So UK companies that buy and sell processed pineapple products beware - if ever there was a likelihood of fraud in a commodity, pineapples are at the top of this tree.