Why traditional British sausages are safe 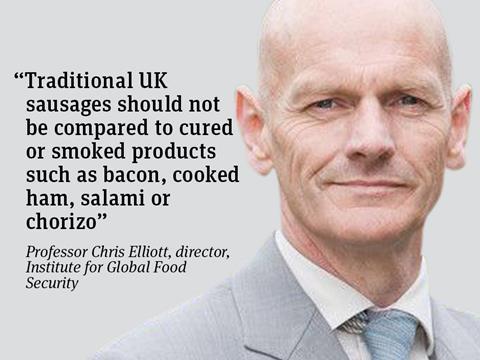 The International Agency for Research on Cancer has reported its findings that eating processed meat can increase a person’s risk of colorectal cancer by 18% for every 50g consumed. So what’s in it that causes this increased risk? The answer in part is the addition of nitrates and nitrites, which can lead to the formation of cancer-causing nitrosamines. Nitrites are used as a food additive to extend shelf life, to provide protection against botulism and gives processed meat its pink colour. The amount of nitrosamines formed through the use of added nitrates/nitrites is influenced by a number of processing factors.

So do manufacturers of traditional UK sausages add nitrate or nitrite and as a result contribute to nitrosamine exposure? Dr Marie Cantwell and myself, in a project funded by Cranswick and Finnebrogue, went to find out. We examined information from 11 food suppliers (Tesco, Asda, Co-op, Sainsbury’s, Iceland, Morrisons, Rankin, The Good Little Company, M&S, Iceland, Ocado). In addition, all suppliers of sausage spice mix used by butchers across the UK were contacted to identify whether nitrates/nitrates were included in their mixes. The results indicate that the vast majority (over 97%) of traditionally made UK sausages do not contain added nitrates or nitrites. As an alternative, the large majority contain either sodium metabisulphite or sodium sulphite as preservatives, which are not deemed to be cancer causing. This is not clearly understood by consumers due to misleading media messages.

Traditional UK sausages should not be compared with cured/smoked products such as bacon, cooked ham and salami. They contribute nitrate levels similar to fresh meat and contribute very little nitrosamine exposure compared with cured processed meat products. Although we have shown that the absolute majority of traditional UK sausages do not contain added nitrates/nitrites, additional work is required to encourage processed meat manufacturers to minimise their use and to seek healthier nitrate/nitrite free preservatives. This is the challenge we lay down to the UK industry and as ever will be happy to help where we can.