Demand is soaring for redistribution charities like FareShare. We need more support 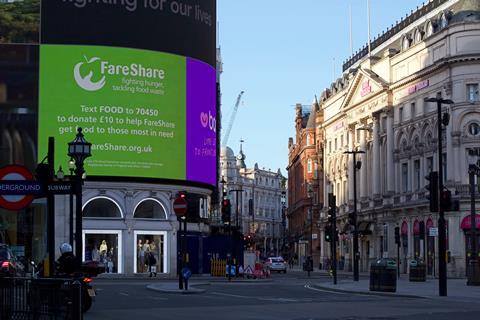 Despite the obvious need, FareShare’s UK government funding has been cut completely

The economy of the UK has been tossed out of the frying pan and into the fire. The pandemic had a disastrous impact on people’s livelihoods, forcing many to seek support from the charity sector. Now, the cost of living crisis has driven 57% more households into food insecurity. People who would not have normally found themselves relying on help are now in queues for food banks, pushed there by the highest rates of inflation for 40 years.

As the UK’s largest charity fighting hunger and tackling food waste, FareShare was on the frontline of the pandemic response along with the rest of the food industry. We are on the frontline again as we face this latest crisis.

We recently surveyed the 10,000 charities that we support across the UK. Of those who responded, 90% said their services were being affected by the cost of living crisis, with three-quarters saying they have seen an increased demand for their services over the past year. Charities are citing an increased cost of food as the primary reason people are accessing their services.

Despite more than two million tonnes of good-to-eat surplus food existing across the production chain in the UK, FareShare cannot access enough food to meet the demand from the charity sector. We have waiting lists of charities at all our regional centres, and we know those we currently supply would take more food from us if they could.

In response to this, FareShare has launched the #RunningOnEmpty campaign, where we are appealing for more food, donations and volunteers to try and meet the demand. If you’re reading this and you think you can help, please visit our website to see how you can. We’re always ready to welcome new partners to join us on our mission.

We’re also taking the fight to Westminster, as, despite the obvious need, FareShare’s UK government funding has been cut completely. Our Surplus with Purpose scheme was set up with a government grant of £1.9m in 2019, as part of a government trial to tackle food waste. The scheme helps to cover the extra costs to small-scale farmers, growers and producers to redistribute their good-to-eat surplus food, rather than letting it go to waste.

The trial resulted in 85% more fruit and vegetables reaching frontline charities and community groups. But government funding ended in 2020, and despite widespread calls and a few warm words, the government is not currently funding food redistribution in the UK. FareShare is asking for a new grant of £5m, which would allow us to redistribute an additional 53 million meals to vulnerable families.

These meals would go some way to meeting the demand caused by the cost of living crisis. I’m given hope by the generosity of the food industry, the public, and the work of the charity sector. Nearly nine in 10 charities that we support provide vital wrap-around care services as well as food. These services include support with unemployment or low income, homelessness, family break-up and abuse, mental health issues and addiction. This work tackles the root causes, not just the symptoms of poverty.

The time for action is now. The forecasts are predicting that inflation will still go up, and that the cost of living crisis will get much worse before it gets better.