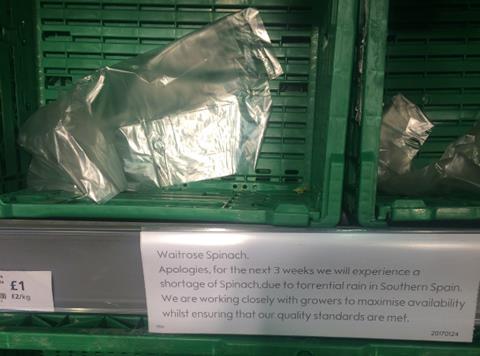 Produce shortages in the mults as a result of poor weather in Europe have escalated this week and are set to continue well into March.

Courgettes, tomatoes and peppers are among the crops affected by flooding in the Murcia region of Spain, which supplies some 80% of the UK’s winter produce, while heavy snow across vast swathes of Southern Europe has also affected the supply chain.

It follows news of spinach shortages across the mults - first revealed by The Grocer last week - with growers warning the vegetable was “like gold dust” in the UK.

Tesco, Waitrose, Sainsbury’s and Morrisons were all reporting supply issues across various SKUs in the produce aisle this week.

On the Tesco website, a raft of products including baby plum tomatoes, Finest sugardrop tomatoes, pre-packed courgettes and some yellow peppers were all listed as “currently not available”.

Courgettes and pepper SKUs were out of stock in Morrisons at the time of writing, with courgettes also unavailable on the Sainsbury’s website this week, and in-store in some regions. Meanwhile Waitrose has been carrying in-store notices apologising for the lack of spinach, and warning it could be up to three weeks before supplies return.

“Due to bad weather conditions in Spain, we are experiencing a few availability issues, but are working with our suppliers to resolve them as quickly as possible,” said a Tesco spokeswoman.

Earlier this month, rainfall in the Murcia region had left some fields reduced to 30% capacity after receiving between 150 and 250 litres of water per square metre, said the Leafy Salad Growers’ Association, which suggested “unprecedented conditions” were making salad supply “very erratic”.

Demand for the significantly reduced harvests was coming from retail and hospitality businesses as well as wholesale markets all over Europe, a spokesman for the association added.

“These difficult trading conditions are set to continue into February and March. We expect to see further contingency supply coming in from the US, which is an expensive solution,” he said.

“It’s pretty tough out there, with a lot of cold weather across southern Europe,” added Anthony Gardiner, marketing director of supplier G’s Fresh. “Snow on the beaches in Greece and stuff like that, and that’s cut its way right across Greece, Italy, Southern France and Spain as well, making it obviously pretty difficult for crops to grow in those conditions.”

Salad supplies were also hit by poor weather in Europe during 2013, leading salad brand Florette to change the mix of salad leaves in its biggest-selling line.

“Thanks to our extensive grower network, Florette has been able to maintain full supply to its customers to date,” said a spokeswoman for the brand this week. “The situation is challenging, however, we are working with our partners to minimise the potential impact. We are in direct contact with all of our customers to keep them updated on the situation as it progresses.”