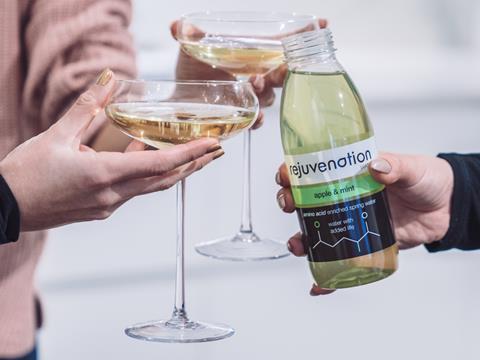 Rejuvenation Water has reached out to the crowd for £150k to drive retail and food to go expansion.

The company, which has focused on health trends with its high-protein drink, has returned to the crowd after raising £190k on Crowdcube last year.

Rejuvenation has decided to seek further investment on the Seedrs platform as it rolls out front of store in Waitrose, looking for more working capital, and to fund marketing, NPD and recruitment.

Founder Kris Ingham said the “amino acid-infused” drink had grown strongly in a sector where competitors have been set back by cost increases or reformulation concerns”.

“We are the world’s first amino acid-enriched, high in protein, water. For us it is very important that we don’t compromise on health.

“In order to survive and prosper we constantly have to innovate, but maintain our healthy ethos. We think this product has a great potential, when you see brands like Vitamin Water worth billions.

“Unlike some competitors we have had no added sugar from day one, and from that launch had a positive response. Now, you are seeing brands like Lucozade reformulating as a result of the sugar tax, but then receiving a negative response from consumers.”

As well as its listing in Waitrose, Rejuvenation Water is listed by Ocado, Costco, and Holland & Barrett and it said another national retailer has agreed to list the drinks in the autumn.

It will be using investments for NPD, and already has plans to launch a 250ml slimline carbonated canned drink to be marketed as a mixer this year.

“This will be our second crowdfund. We did one on Crowdcube last year and that was fantastic for us. On the back of that we were able to increase distribution, and our distribution is now up around 800% for the year and expect that to increase,” said Ingham.

“We now have more than 200 investors and it creates a tribe of really good brand ambassadors. A lot of the funding will go into growing the company internationally -as well as in the UK - and we are already selling in six countries.

“It will also go into new products and working capital, as we really need more capital in order to keep up with demand, such is the level of growth at the moment.”