General Mills brings its $500m Fibre One brand to the UK 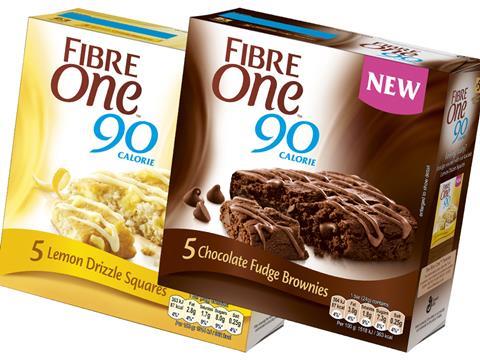 Häagen-Dazs and Green Giant owner General Mills is bringing $500m (£330m) US ‘megabrand’ Fibre One to the UK.

The brand is making its UK debut next week with the launch of two snacks - Chocolate Fudge Brownies and Lemon Drizzle Squares (rsp: £2.89) - in Tesco ahead of a wider rollout. The business said the 90-calorie products would fill a gap in the market for indulgent snacks that were high in fibre and lower in fat. They contained at least 30% more fibre and 30% less fat than typical brownies, caramel cake bars or lemon bars sold in the UK, it claimed.

Launched in the US as a cereals brand in 1985, Fibre One has been extended to include cereal bars, biscuits and baking products that all provide at least 20% of the recommended daily amount of fibre. Sales were up 10% year on year, said General Mills, adding the products launching in the UK had been a US hit.

“We picked the soft baked squares range as it was an outstanding success in the US and really answered consumer needs in the UK,” said Arjoon Bose, marketing manager for snacking at General Mills (UKI & Northern Europe). “Combined with being able to manufacture in Spain, this gave us the confidence to proceed with executing this launch initiative for UK.”

General Mills said there were no plans to bring other US lines to the UK. “Our focus is to successfully launch the soft-baked squares into Tesco and drive distribution by securing further listings,” added Bose.

The rollout is being supported with sampling, in-store and digital activity from January, with advertising set to launch next summer.

General Mills recently announced plans to close several manufacturing sites including its Jus-Rol pastry plant. In its full-year results to 31 May 2015, the company reported a 2% fall in net sales, with operating profit down 4%.