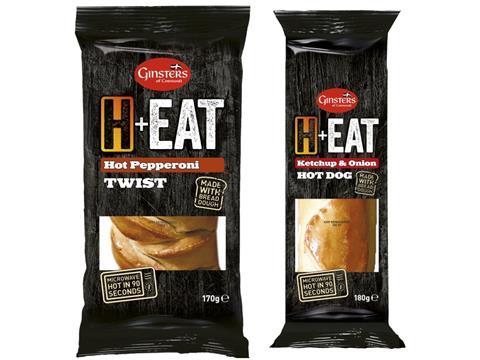 H+Eat: the first step towards a microwave sub-brand

Ginsters is expanding into microwave snacks with a new sub-brand that includes hotdogs and a burrito.

The Cornish business said it had made “significant investment” in R&D and in its bakery in Callington to launch the H+Eat range (pronounced heat & eat). It added that it was looking to tap the “mega-trend” of convenience that had helped drive 9% growth in the microwave snacks market to £111m [IRI 52w/e 1 March 2014].

Launching with a five-strong range comprising Hot Pepperoni Twist, Ham & Cheese Twist, Hot Dog with Ketchup & Onions, Hot Dog with Mustard & Onions (all rsp £2.29) and a Burrito (rsp £3.49), the range had a unique bread dough recipe that Ginsters claimed would “microwave to perfection in 90 seconds”.

The products have soft-launched into some Tesco stores over recent weeks, and are expected to be in full distribution by the end of April. “We conducted our most significant programme of research prior to launch,” said Ginsters corporate communications manager Jo Hartop. She added that the launch was seen as the start of establishing a microwave sub-brand for Ginsters.

The H+Eat brand offered a lot of flexibility for further extension, she said, not ruling out expansion into more established parts of the microwave snack category such as burgers.

The launch of H+Eat comes as competition hots up in the market. The Grocer last week revealed that Kepak’s Rustlers and Zugos brands had lost their Morrisons listings and were being replaced with the Taste Inc brand launched by CP Foods last year.

While Ginsters said it was looking to primarily target a 16 to 24-year-old audience with its H+Eat lines, Taste Inc said the success of its range was down to it appealing to a wider audience.