Unhealthy food: time to get drastic on reformulation 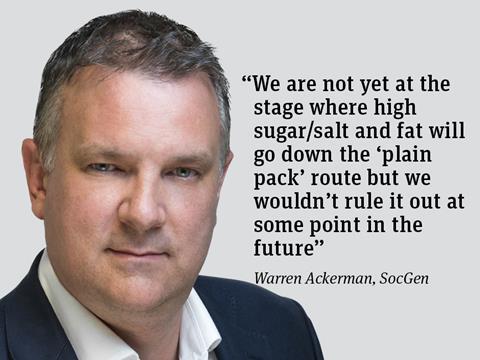 At this time of year, City analysts are looking to the Extel survey - think of it as the City Oscars. To distract us from this, we continue to focus our research efforts on the topic of healthy eating, specifically how quickly it is accelerating and who the sector winners and losers will be. Governments around the world are waking up to the time-bomb of obesity and the long-term pressure it will put on the already overstretched public sector. Public Health England has asked the industry to cut calories by 20% by 2024 and, while voluntary, this is likely to be enforced by retailers. Food manufacturers are reformulating recipes, introducing new products and updating their portfolios through M&A, but all of these options are risky and expensive.

Another problem is that defining what makes food healthy is far from easy - there is nearly always a compromise between longer shelf life and health. Is cows milk more or less healthy than plant-based milk? The latter generally contains fewer calories and less fat, salt and sugar, but it is also packed with preservatives. In our research, we look at healthy food in two ways - distinguishing between negative nutrients (for example fat, salt and sugar) and positive ones (protein, plant-based, clean label). In both cases we think functional ingredients companies, which can help the old food manufacturers reformulate their existing products, have a key role to play.

Generally, European food manufacturers are ahead of their US counterparts on healthy food, but things are changing fast. In the US, the older food manufacturers are starting to fight back - so far mostly by buying their faster-growing rivals. Danone’s $10bn purchase of Whitewave (the owner of Silk and Alpro plant-based milks) was one of the first acquisitions of this kind. More recent acquisitions include Kellogg buying RXBar ($600m), Campbell soup buying Snyder’s Lance ($6bn) and Hershey buying Amplify ($1.5bn).

There is also a lot of reformulation under way. For example, Nestlé has patented a method of hollowing out sugar crystals that means the sugar dissolves more quickly and less can be used to achieve the same sweetness. Kraft Heinz has removed artificial colours from its Mac & Cheese and removed artificial preservatives and added nitrates and nitrites from its Oscar Mayer hot dogs. The success of Halo Top’s high-protein, low-calorie ice cream is a great example of innovation in this field that led to a company coming from nowhere in 2012 to be the bestselling ice cream in the US in the summer of 2017. On the back of the UK sugar tax, AG Barr, owners of Irn-Bru, has reformulated 99% of its portfolio such that is not hit by the tax. This tax seems to have worked and may result in the government pursuing sugar in junk food.

We think reformulation will explode from here, driven by younger consumers and regulation. The industry needs to act faster as complacency could lead to far-reaching consequences. We are not yet at the stage where high sugar/salt and fat will go down the ‘plain pack’ route, as tobacco has in many countries, but we wouldn’t rule it out in the future. Small incremental improvements are not enough; drastic action is required.