We need to wake up to the coffee cup recycling conundrum 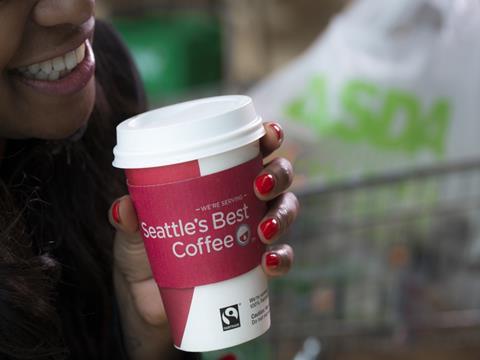 Environment secretary Andrea Leadsom is in hot water today over the controversial decision to exclude coffee cups from an anti-litter taskforce in what has been dubbed a ‘latte litter let-off’.

Under the new Government Litter Strategy for England, Leadsom and co have outlined plans to reduce the £800m burden of litter clean-up costs. The strategy includes creating an ‘anti-litter culture’, doubling the fines for those caught undertaking the antisocial behaviour and helping councils to update the ‘binfrastructure’ to make it easier for the nation to dispose of their rubbish.

Sounds okay, doesn’t it? But many are up in arms about the omission of coffee cups, with the taskforce instead said to be focusing on cigarette ends, fast food packaging and plastic bottles.

Before the nation grabs its pitchforks, let’s take a step back. Research by Frugelpac, which claims to have created a ‘revolutionary’ paper coffee cup, found that only one in every 400 coffee cups are recycled. With more than 2.5 billion takeaway cups disposed of in the UK every year, that equates to a lot of cups heading for the local landfill or energy-from-waste plant.

But increasing the number of bins on high streets across the country isn’t going to solve this problem. For starters, coffee cups aren’t recyclable – at least not as part of a mixed recyclables collection. They need to be collected separately from other materials, and currently only two pulping facilities in the UK can process them as the thin layer of plastic film needs to be split from the paper.

That would mean a whole lot more specialist bins, and bin lorries, up and down the country, with the cups potentially travelling hundreds of miles just to be recycled. It’s unlikely to pay off environmentally or financially.

On top of this, as reported by The Grocer earlier today, many consumers are confused about what to do with their coffee cups. Half believe they are already being recycled, leading to contamination of loads collected for recycling, while only 10% use the specialist in-store recycling bins. Plus, the inherent on-the-go nature of coffee means the latter isn’t really a practical solution.

Perhaps reinventing the wheel – or in this case the coffee cup – could work. There are a few interesting, and wholly recyclable options out there: ones that, the creators claim, involve collection as part of a standard recycling round. But making this work would require buy-in by the coffee chains to really make an impact.

Ultimately, a more fundamental move away from throwaway culture could pay dividends (and save Brits money on their morning caffeine hit). Pret and Paul have just unveiled discounts for customers using reusable coffee cups, something the likes of Costa and Starbucks already practice. But few chains actually sell the cups in store.

A government policy isn’t going to be a silver bullet for the nation’s coffee cup recycling problem. Commitment from all parties – consumers, manufacturers, retailers, government – is required.